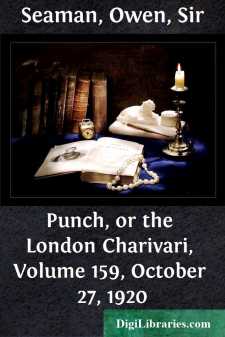 Some idea of the evils consequent on a coal strike can be obtained when we hear there was talk of a football match in the North having to be cancelled.

Mr. Lloyd George is certainly most unlucky. As a result of the coal strike the New World has again been postponed.

We are assured that everything has been done to safeguard our food supply. We ourselves have heard of one grocer who has sufficient fresh eggs to last him for many months.

"Large numbers of South Wales miners left by train yesterday for the seaside," says Lloyd’s News. Unfortunately they did not travel by the Datum Line.

The Opera House at Covent Garden is to be used as a cinema theatre. Meanwhile the House of Commons remains firm.

The Daily Mail Prize Hat has now been chosen, though it is not yet definitely decided whether the wearing of it will be made compulsory. If it is, we understand that Mr. Winston Churchill will apply for exemption.

Thieves have broken into the railway station at Blaenau Festiniog and stolen a quantity of chocolate. Apparently with the idea of confusing the police, they left the name of the station behind them.

Twenty-one persons have been injured as the result of the explosion of a bomb in a first-class carriage on the Brazil Central Railway. The culprit, we understand, has written to the company expressing regret, but pointing out that no seat was available in a third-class carriage.

A ship’s cook has been fined twenty shillings for refusing to join his ship, his excuse being that he had seen a rat as big as a cat in the cabin. It was pointed out to him that only ship’s officers are entitled to see rats in the cabin.

A company has been formed at Stockholm for storing wind power. There should be a great demand for the insides of some puff pastry that we know of.

An American has invented an aeroplane capable of remaining in the air for hours and hours. This is nothing to Mr. Asquith’s Irish solution, which is guaranteed to remain in the air for years and years.

Brides are getting rather tired of Harris’s lilies, says a writer in The Daily Graphic. It is only natural that brides should become rather bored if they always wear the same sort of flowers every time they’re married.

Mr. E. Van Ingen, a New York merchant now in London, boasts that he has crossed the Atlantic one hundred and sixty-eight times. It may be against the Prohibition laws, but we fancy it would be cheaper if he kept a few bottles of the stuff in New York.

A medical man advises people to use dried milk on health grounds. We have felt for some time that what was wanted was a really good waterproof milk.

Mr. E. A. Douse has spent forty-two years in a Cheshire post-office. It is only fair to say that the young lady behind the counter didn’t notice him standing there all that time.

A Hertfordshire farmer, says The Daily Mail, has counted one hundred and twenty-three grains of wheat in one ear. Our contemporary has not yet decided what can be done about it.