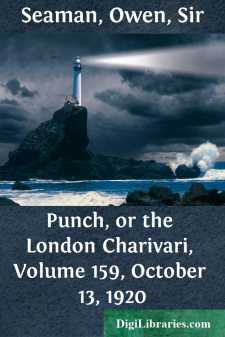 Mr. Riazanov, the successor to Kameneff, is now residing in Grosvenor Street. Several readers have written to ask us how his name is pronounced. Wrongly, we believe, in nine cases out of ten.

We have been given to understand that that versatile pair, the Two Bobs, are contemplating a tour of the music-halls in the mining district, where they are sure to be given a rousing reception.

According to The Evening News two miners recently played a quoit match for a hundred pounds. In all probability they are now agitating for the two shillings' increase to enable them to have a little side bet.

"We cannot choose how we will be born," says a medical writer. No; some are born poor and others are born into a miner's family.

"Where stands England to-day?" we are asked. While travelling in the Tube we have often thought that most of it was standing on our feet.

"With the outgoing of September we face once more the month of October, with its falling leaves and autumn gales," states a writer in a daily paper. This, we understand, is according to precedent.

A Glamorgan collier, summoned for income-tax, stated that he earned eleven pounds a week and wanted every penny of it. It is said that he is saving up to buy a strike of his own.

A live frog is reported to have been found in a coal seam at a Monmouthshire colliery. It seems to have been greatly concerned at having missed the previous strike ballot.

With reference to Mr. Spender's interview with Mr. Lloyd George we regret that no mention is made of the exact date when the Prime Minister will declare the New World open.

Since it has been so well advertised we understand that the banned poster, "The Unknown," is shortly to be renamed "The Very Well Known."

The ex-Kaiser is reported to have made his will. He has bequeathed his trial to his youngest grandson.

It is proposed to make Poole a first-class port, at a cost of £3,750,000. We cannot help thinking that hidden away in some Government office is a man who could do it at treble the cost.

A London firm of pastrycooks have purchased two obsolete tanks from the Disposal Boards. They are said to make excellent utensils for flattening pancakes.

A dainty little invention has just been tried by the Bolshevists, which consists of a method whereby boiling water from the ship's boiler can be pumped on to sailors who do not obey their officers. It is said to be just the thing to keep their minds off the idea of mutiny.

"I have all the qualifications for a post in some Government office," writes an Unemployed Ex-Soldier in a contemporary. It is to be hoped that this drawback will be overlooked if his other disqualifications are satisfactory.

Washable hats for boys is one of the new inventions at the Leather and Shoe Trade Exhibition. Small boys are now going about in fear that the next discovery will be a washable neck.

Six bandits entered the Central Café, New York, the other day and took one thousand pounds from the diners....