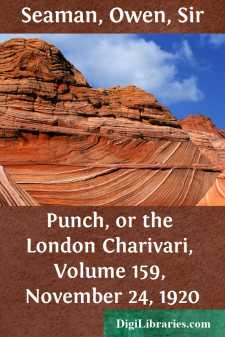 No sooner had the League of Nations met at Geneva than news came of the pending retirement of Mr. Charlie Chaplin. We never seem to be able to keep more than one Great Idea going at a time.

"Have you read Mrs. Asquith's Book?" asks an evening paper advertisement. "What book?" may we ask.

"In our generation," says Dean Inge, "there are no great men." It is said that Sir Eric Geddes will not take this lying down.

Since the Gloomy Dean's address at Wigmore Hall it is suggested that the world should be sold to defray expenses while there is yet time.

"What is wanted to-day," says Mr. H. M. Rioden, "is a Destruction of Pests Bill." "Jaded Householder" writes to say that when this becomes law anybody can have the name of his rate-collector.

"M. Rhallis, the new Greek Premier," says The Evening News, "is a regular reader of The Daily Mail." We had felt all along he was one of us.

"Dendrology," says a contemporary, "is an admirable pursuit for women." We seem to remember, however, that one of the earliest female arboriculturists made a sad mess of it.

According to the U.S.A. Bureau of Standards the pressure of the jaw during mastication is eleven tons to the square inch. If this is propaganda work on behalf of the United States' bacon industry we regard it as particularly crude.

A Sioux City millionaire is said to have paid two hundred pounds for a goat. He claims that it is the only thing in Iowa that has whiskers and isn't thirsty.

"Mr. Graham Bell, the inventor of the telephone, has just visited Edinburgh, his birthplace, after an absence of fifty years," says a news item. We can only say that if he invented our telephone he had reason to keep away.

"After all," says an evening paper, "the Coalition is only human." The Times, however, is not quite so sure about it.

It is said that Mr. Bottomley is about to make a powerful announcement to the effect that the present year will be nearly all over by Christmas.

In connection with the Ministry of Health Bill, we read, not a penny of additional expenditure or expense will fall on the ratepayer or taxpayer. People are now wondering whether the Government thought of that one themselves.

Balls made of newspapers soaked in oil are said to be a good substitute for coal. It seems as if newspapers are determined to get a good circulation somehow.

Cars that run into four figures were to be seen at many stands at the recent Motor Show. In the ordinary way motor-cars run into as many figures as get in their way.

It appears that the man who was knocked down in Charing Cross Road by a motor-scooter was one of the middle class, and so could not afford to have it done properly by a motor-car.

It is rumoured that a Radical paper is about to offer a prize of one hundred pounds for the best design for a Daily Mail halo.

A man charged at the Guildhall admitted that he had been convicted sixty-seven times. Indeed it is understood that he has only to say "Season" to be admitted to any police-court.