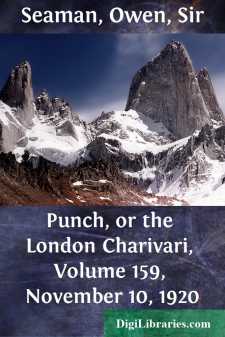 The really intriguing thing about Naval prize-money is the fact that no one knows exactly where it comes from. You don't win it by any definite act of superlative daring—I mean to say, you don't have to creep out under cover of darkness and return in the morning with an enemy battleship in tow to qualify for a modicum of this mysterious treasure. You just proceed serenely on your lawful occasions, confident in the knowledge that incredible sums of prize-money are piling themselves up for your ultimate benefit. I suppose the authorities understand all about it; nobody else does. One just lets it pile. It is a most gratifying thought.

During the more or less stormy times of the First Great War, we of the Navy were always able to buttress our resolution with golden hopes of a future opulence denied to our less fortunate comrades in the trenches. Whenever the struggle was going particularly badly for us—when, for instance, a well-earned shore-leave had been unexpectedly jammed or a tin of condensed milk had overturned into somebody's sea-boot—we used to console each other with cheerful reminders of this accumulating fruit of our endeavours. "Think of the prize-money, my boy," we used to exclaim; "meditate upon the jingling millions that will be yours when the dreary vigil is ended;" and as by magic the unseemly mutterings of wrath would give place to purrs of pleasurable anticipation. Even we of the R.N.V.R., mere temporary face-fringes, as it were, which the razor of peace was soon to remove from the war-time visage of the Service—even we fell under the spell. "Fourteen million pounds!" we would gurgle, hugging ourselves with joy in the darkness of the night-watches.

In the months immediately following demobilisation I was frequently stimulated by glittering visions of vast wealth presently to be showered upon me from the swelling coffers of a grateful Admiralty. During periods of more or less temporary financial embarrassment I would mention these expectations to my tailor and other restless tradespeople of my acquaintance. "Fourteen millions—prize-money, you know," I would say confidentially; "may come in at any time now." I found this had a soothing effect upon them.

As the seasons rolled by, however; as summer and winter ran their appointed courses and again the primrose pranked the lea unaccompanied by any signs of vernal activity on the part of the Paymaster-in-Chief, these visions of mine became less insistent. I was at length obliged to confess that another youthful illusion was fading; prize-money began to take its place in my mind along with the sea-serpent and similar figures of marine mythology. I was frankly hurt; I ceased even to raise my hat when passing the Admiralty Offices on the top of a bus.

That was a month or two ago; everything is all right again now. I once more experience the old pleasing thrill of emotion when riding down Whitehall. I have come to see how ungracious my recent attitude was.