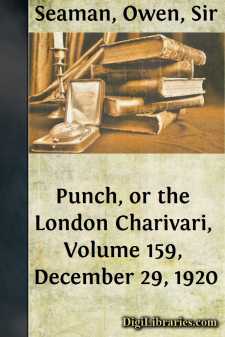 No newspapers were published on Saturday, Sunday or Monday. We did not begrudge them their holiday, but we do think The Daily Mail might have issued occasional bulletins respecting the weather at Thanet, as we consider three days is too long to keep their readers in suspense.

The most popular indoor game this winter seems to be Battledore-and-Juttlecock.

A woman informed a London magistrate last Tuesday that her husband thrashed her at Easter, Whitsuntide and on August Bank Holiday. Our thoughts were constantly with her during the recent Yuletide festivities.

Readers should not be alarmed if a curious rustling noise is heard next Saturday morning. It will be simply the sound of new leaves being turned over.

In view of the possible increase of their salaries it is not the intention of Members of Parliament to solicit Christmas-boxes. Householders, therefore, should be on their guard against men passing themselves off as M.P.s.

Our attention is drawn to the fact that the latest photograph of Mr. Lloyd George shows him to be smoking a cigar with the band on. We can only say that Cromwell wouldn't have done it.

Our magistrates appear to be made of poor stuff these days. A man named Snail was last week summoned before the Feltham magistrates for exceeding the speed limit, yet no official joke was made. Incidentally, why is it that Mr. Justice Darling never gets a real chance like this?

A New York policeman has been arrested in the act of removing a safe from a large drapery store. It is said that upon being seen by another policeman he offered to run and fetch a burglar.

Mme. Delysia has been bitten by a dog in New York. The owner's defence, that the animal had never tasted famous dancer before, is not likely to be accepted.

Like a soothing balm just before the old year dies comes the intimation from Mr. Lovat Fraser that there is a bright side to things.

With reference to the opening of the pantomime season it is reported that a couple of new jokes have been found nesting in a Glasgow theatre.

Psychologists are inclined to attribute the recent night stampede of sheep in the Midlands, when thousands of them jumped their hurdles, to the influence of a large number of people concentrating on a well-known remedy for sleeplessness.

It is stated that rabies does not exist in Ireland. Our opinion is that it wouldn't be noticed if it did.

Very few English Christmas customs, we hear, are prevalent out in Russia. We have always felt that the custom of clients giving Christmas-boxes to their executioners will never become very popular.

It is rumoured that the repeated assassinations of General Villa have made it necessary for him to resign his position as Permanent Chief Insurgent to the State of Mexico.

The Morning Post has remarked that nowadays the Eton boy is often reduced to travelling third-class. It is hoped to persuade Sir Eric Geddes to disguise himself as an Eton boy during the holidays to see how it feels.