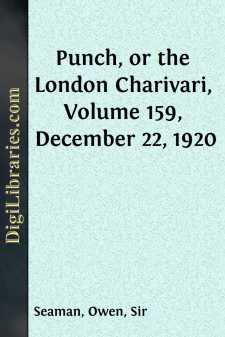 It is pointed out that the display of December meteors is more than usually lavish. Send a postcard to your M.P. about it.

Mr. Lloyd George recently stated that the first prize he ever won was for singing. It is only fair to say that this happened in the pre-Northcliffe era.

An elderly Londoner recalls a Christmas when the cold was so intense that in a Soho restaurant the ices froze.

There has arrived at the Zoo a bird akin to the partridge and excellent for the table, but unable to fly. The very thing for the estate of a sporting profiteer.

"What is the best fire preventative?" asks a weekly journal. The answer is, the present price of coal.

The National Rat Campaign this year, we are told, was a great success. On the other hand we gather that several rats have threatened to issue a minority report.

"There is nothing so enjoyable," says a newspaper correspondent, "as a trip across the water to Ireland." Except, of course, a trip back again.

A number of Huns are receiving Iron Crosses through the post inscribed "Your Fatherland does not forget you." How like Germany! She won't even allow bygones to be bygones.

"Let Christmas come," says a contemporary headline. We have arranged to do so.

A Minneapolis judge rules that a man has the right to declare himself head of the household. Opinion in this country agrees that he has the right but rarely the pluck.

"My faith in the League of Nations is not shaken," says Lord Robert Cecil. This is the dogged spirit which is going to make this country what it used to be.

"It may yet be possible," according to the Water Power Resources Committee, "to harness the moon." This of course would depend upon whether Sir Eric Geddes would let them have it or not.

Cinema stunt actors, says The Manchester Guardian, expect to be paid fifty pounds for a motor smash. It seems an injustice that ordinary pedestrians should have to take part in this sort of thing for nothing.

The continued disappearance of notepaper from a well-known club has now been traced to a large female cat, and most of the paper has been recovered from her sleeping-basket. It is thought that she was probably preparing to write her memoirs.

A burglar who broke into a private house near Hitchin helped himself to a good supper before leaving. It is pleasing to learn, however, that, judging by the disordered state in which the pantry was left, the Stilton cheese must have put up a splendid fight.

It was most unfortunate that Mr. "Fatty" Arbuckle's visit to London should have clashed with the Cattle Show at the Royal Agricultural Hall.

During a recent revue performance in London the conductor accidentally turned over two pages of music at once and the orchestra suddenly ceased playing. Several words of the chorus were actually heard by those sitting in front before the mistake could be rectified.

Green peas in excellent condition, says a contemporary, have been picked at Pentlow, Sussex. It serves them right.