Portia or By Passions Rocked 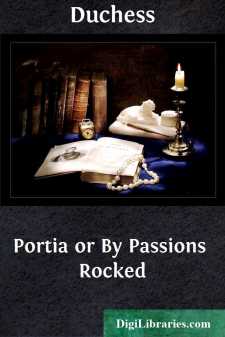 CHAPTER I. "A child of our grandmother Eve, a female; or, for thy more sweet understanding, a woman."—Love's Labors Lost.

The gates are thrown wide open, and the carriage rolls smoothly down the long dark avenue, beneath the waving branches of the tall elms and the copper beeches, through which the dying sun is flinging its parting rays.

The horses, sniffing the air of home, fling up their heads and make still greater haste, until presently, rounding the curve, they draw up before the hall door.

It stands open, and on the high, stone steps that lead to it, a very pretty girl looks down upon the carriage from under her palm, with a face eager and expectant. When she has barely glanced at it, she says, "Ah!" in a tone of deep satisfaction, and running down the steps and over the gravel, turns the handle of the carriage door and looks anxiously at its occupant.

"You have come," she says, cheerily. "I was so afraid something might have prevented you."

The person she addresses—a girl about two years older than herself, says:

"Yes, I have come," in a tone slow and sweet, almost to languor.

"So glad," says the pretty girl, with a smile that must be one of her sweetest charms, it is so full of life and gaiety; "come out of this dreadful old sarcophagus and upstairs with me; I have your tea in your own room for you."

Miss Vibart, stepping out of the brougham, follows her hostess into the house, through the grand old hall, and up the wide, oak staircase, into a room huge and old-fashioned—but delicious and cozy, and comfortable to the last degree.

Having cast one hasty glance round the apartment, Miss Vibart turns to her young hostess—

"You are Dulcinea? isn't it?" she says, questioningly.

"Yes, I am Dulcinea as a rule—(may I be your maid, just for once—you will be so much happier without your hat)—but I have so many other names, that it takes me all my time to remember which one I really belong to. Uncle Christopher calls me Baby! and Mark Gore, when he is here, calls me Duchess, and Dicky Browne calls me Tom, and Roger calls me—I really quite forget what it is Roger calls me," with a slight shrug of her shoulders.

"Is Dicky Browne your fiancé?" asks Miss Vibart, uncertainly; "I know you are engaged to somebody; Auntie Maud told me that."

"Dicky Browne! Oh, no!" Then, with the gayest little laugh in the world, "If you could only see Dicky Browne! He couldn't, by any possibility, be anybody's fiancé! You mean Roger, I suppose." But, with a quick frown and a touch of petulance, "Don't let us talk about him. He is such a worry, and has been making himself so exceedingly unpleasant all the morning!"

Miss Vibart stares, forgetting her usually very charming manners for the moment, and then drops her heavily-fringed lids over her eyes.

"By-the-by," says Dulce, breaking in upon what threatens to be an awkward pause, "how d'ye do? I don't believe I have said that yet." Her whole tone and expression have changed as if by magic; the suggestion of ill-temper is gone; the former vivacity re-asserts itself....