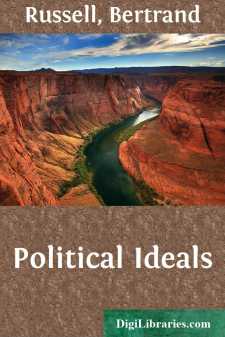 In dark days, men need a clear faith and a well-grounded hope; and as the outcome of these, the calm courage which takes no account of hardships by the way. The times through which we are passing have afforded to many of us a confirmation of our faith. We see that the things we had thought evil are really evil, and we know more definitely than we ever did before the directions in which men must move if a better world is to arise on the ruins of the one which is now hurling itself into destruction. We see that men's political dealings with one another are based on wholly wrong ideals, and can only be saved by quite different ideals from continuing to be a source of suffering, devastation, and sin.

Political ideals must be based upon ideals for the individual life. The aim of politics should be to make the lives of individuals as good as possible. There is nothing for the politician to consider outside or above the various men, women, and children who compose the world. The problem of politics is to adjust the relations of human beings in such a way that each severally may have as much of good in his existence as possible. And this problem requires that we should first consider what it is that we think good in the individual life.

To begin with, we do not want all men to be alike. We do not want to lay down a pattern or type to which men of all sorts are to be made by some means or another to approximate. This is the ideal of the impatient administrator. A bad teacher will aim at imposing his opinion, and turning out a set of pupils all of whom will give the same definite answer on a doubtful point. Mr. Bernard Shaw is said to hold that Troilus and Cressida is the best of Shakespeare's plays. Although I disagree with this opinion, I should welcome it in a pupil as a sign of individuality; but most teachers would not tolerate such a heterodox view. Not only teachers, but all commonplace persons in authority, desire in their subordinates that kind of uniformity which makes their actions easily predictable and never inconvenient. The result is that they crush initiative and individuality when they can, and when they cannot, they quarrel with it.

It is not one ideal for all men, but a separate ideal for each separate man, that has to be realized if possible. Every man has it in his being to develop into something good or bad: there is a best possible for him, and a worst possible. His circumstances will determine whether his capacities for good are developed or crushed, and whether his bad impulses are strengthened or gradually diverted into better channels.

But although we cannot set up in any detail an ideal of character which is to be universally applicable—although we cannot say, for instance, that all men ought to be industrious, or self-sacrificing, or fond of music—there are some broad principles which can be used to guide our estimates as to what is possible or desirable.

We may distinguish two sorts of goods, and two corresponding sorts of impulses....