Piano and Song How to Teach, How to Learn, and How to Form a Judgment of Musical Performances 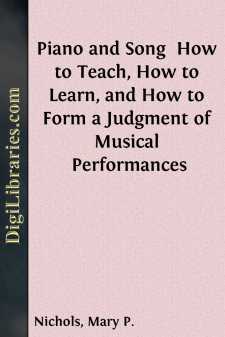 CHAPTER I. ON ELEMENTARY PIANO-FORTE INSTRUCTION.

You ask, my dear friend, for some particular information about my piano method, especially with regard to my mode of elementary instruction, which differs essentially from that in common use.

I give you here the main points; and, if you place confidence in my experience of forty years, and if you will supply those details which I have omitted, your own varied experience as a thoughtful, talented, and earnest piano-teacher will enable you to understand my theory, from the following dialogue between my humble self under the title of Dominie, my friend, and the little Bessie:—

Dominie. My dear friend, how have you managed to make piano-playing so utterly distasteful to little Susie? and how is it that the instruction which you have given her for the last three years actually amounts to nothing?

Friend. Well, I will tell you how I have proceeded. First I taught her the names of the keys, that was pretty dull work for her; then I made her learn the treble notes, which was a difficult matter; after that I taught her the bass notes, which puzzled her still more; then I undertook to teach her a pretty little piece, which she hoped to perform for the delight of her parents. Of course she constantly confused the bass and treble notes, she could not keep time, she always used the wrong fingers and could not learn it at all. Then I scolded her,—she only cried; I tried a little coaxing,—that made her cry worse; finally I put an end to the piano lessons, and she begged me never to begin them again; and there you have the whole story.

Dominie. You certainly might have begun more judiciously. How is it possible for a child to climb a ladder when not only the lower rounds, but a great many more, are wanting? Nature makes no leaps, least of all with children.

Friend. But did she not begin to climb the ladder at the bottom?

Dominie. By no means. She certainly never was able to reach the top. I should say, rather, that she tumbled down head foremost. To speak mildly, she began to climb in the middle; and even then you tried to chase her up, instead of allowing her, carefully and quietly, to clamber up one step at a time. Bring me your youngest daughter, Bessie, and I will show you how I give a first lesson.

Dominie. (after repeating this several times). That's good: now you see you have learned something already. That is the musical alphabet, and those are the names of the white keys on the piano-forte. Presently you shall find them out, and learn to name them yourself. But, first, you must take notice (I strike the keys in succession with my finger, from the one-lined c to the highest treble) that these sounds grow higher and become sharper one after the other; and in this way (I strike the keys from one-lined c to the lowest bass) you hear that the sounds grow lower and heavier. The upper half, to the right, is called the treble; the lower half is the bass. You quite understand now the difference between the high sharp tones and the low deep ones? Now we will go on. What you see here, and will learn to play upon, is called the key-board, consisting of white keys and black ones. You shall presently learn to give the right names both to the white keys and the black; you see there are always two black keys and then three black keys together, all the way up and down the key-board. Now put the fore-finger of your right hand on the lower one of any of the two black keys that are together, and let it slip off on to the white key next below it; now you have found the key called c; what is the name of the next key above it?...