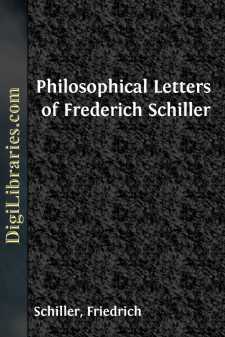 The reason passes, like the heart, through certain epochs and transitions, but its development is not so often portrayed. Men seem to have been satisfied with unfolding the passions in their extremes, their aberration, and their results, without considering how closely they are bound up with the intellectual constitution of the individual. Degeneracy in morals roots in a one-sided and wavering philosophy, doubly dangerous, because it blinds the beclouded intellect with an appearance of correctness, truth, and conviction, which places it less under the restraining influence of man's instinctive moral sense. On the other hand, an enlightened understanding ennobles the feelings,—the heart must be formed by the head.

The present age has witnessed an extraordinary increase of a thinking public, by the facilities afforded to the diffusion of reading; the former happy resignation to ignorance begins to make way for a state of half-enlightenment, and few persons are willing to remain in the condition in which their birth has placed then. Under these circumstances it may not be unprofitable to call attention to certain periods of the awakening and progress of the reason, to place in their proper light certain truths and errors, closely connected with morals, and calculated to be a source of happiness or misery, and, at all events, to point out the hidden shoals on which the reason of man has so often suffered shipwreck. Rarely do we arrive at the summit of truth without running into extremes; we have frequently to exhaust the part of error, and even of folly, before we work our way up to the noble goal of tranquil wisdom.

Some friends, inspired by an equal love of truth and moral beauty, who have arrived at the same conviction by different roads, and who view with serener eye the ground over which they have travelled, have thought that it might be profitable to present a few of these resolutions and epochs of thought. They propose to represent these and certain excesses of the inquiring reason in the form of two young men, of unequal character, engaged in epistolary correspondence. The following letters are the beginning of this essay.

The opinions that are offered in these letters can only be true and false relatively, and in the form in which the world is mirrored in the soul of the correspondent, and of him only. But the course of the correspondence will show that the one-sided, often exaggerated and contradictory opinions at length issue in a general, purified, and well-established truth.

Scepticism and free-thinking are the feverish paroxysms of the human mind, and must needs at length confirm the health of well-organized souls by the unnatural convulsion which they occasion. In proportion to the dazzling and seducing nature of error will be the greatness of the triumphs of truth: the demand for conviction and firm belief will be strong and pressing in proportion to the torment occasioned by the pangs of doubt. But doubt was necessary to elicit these errors; the knowledge of the disease had to precede its cure. Truth suffers no loss if a vehement youth fails in finding it, in the same way that virtue and religion suffer no detriment if a criminal denies them.

It was necessary to offer these prefatory remarks to throw a proper light on the point of view from which the following correspondence has to be read and judged.

You are gone, Raphael—and the beauty of nature departs: the sere and yellow leaves fall from the trees, while a thick autumn fog hangs suspended like a bier over the lifeless fields. Solitary, I wander through the melancholy country. I call aloud your name, and am irritated that my Raphael does not answer me....