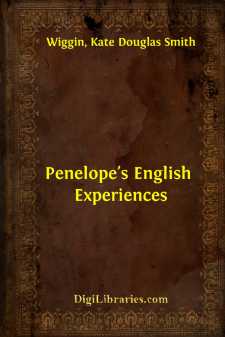 Chapter I. The weekly bill.

Here we are in London again,—Francesca, Salemina, and I. Salemina is a philanthropist of the Boston philanthropists limited. I am an artist. Francesca is— It is very difficult to label Francesca. She is, at her present stage of development, just a nice girl; that is about all: the sense of humanity hasn't dawned upon her yet; she is even unaware that personal responsibility for the universe has come into vogue, and so she is happy.

We are not only in London again, but we are again in Smith's private hotel; one of those deliciously comfortable and ensnaring hostelries in Mayfair which one enters as a solvent human being, and which one leaves as a bankrupt, no matter what may be the number of ciphers on one's letter of credit; since the greater one's apparent supply of wealth, the greater the demand made upon it. I never stop long in London without determining to give up my art for a private hotel. There must be millions in it, but I fear I lack some of the essential qualifications for success. I never could have the heart, for example, to charge a struggling young genius eight shillings a week for two candles, and then eight shillings the next week for the same two candles, which the struggling young genius, by dint of vigorous economy, had managed to preserve to a decent height. No, I could never do it, not even if I were certain that she would squander the sixteen shillings in Bond Street fripperies instead of laying them up against the rainy day.

It is Salemina who always unsnarls the weekly bill. Francesca spends an evening or two with it, first of all, because, since she is so young, we think it good mental-training for her, and not that she ever accomplishes any results worth mentioning. She begins by making three columns headed respectively F., S., and P. These initials stand for Francesca, Salemina, and Penelope, but they resemble the signs for pounds, shillings, and pence so perilously that they introduce an added distraction.

She then places in each column the items in which we are all equal, such as rooms, attendance, fires, and lights. Then come the extras, which are different for each person: more ale for one, more hot baths for another; more carriages for one, more lemon squashes for another. Francesca's column is principally filled with carriages and lemon squashes. You would fancy her whole time was spent in driving and drinking, if you judged her merely by this weekly statement at the hotel.

When she has reached the point of dividing the whole bill into three parts, so that each person may know what is her share, she adds the three together, expecting, not unnaturally, to get the total amount of the bill. Not at all. She never comes within thirty shillings of the desired amount, and she is often three or four guineas to the good or to the bad....