On The Art of Reading 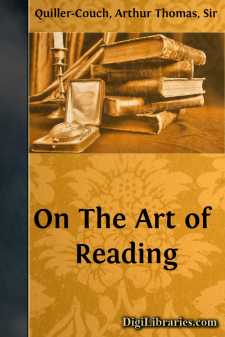 LECTURE I INTRODUCTORY WEDNESDAY, OCTOBER 25, 1916 I

In the third book of the "Ethics", and in the second chapter, Aristotle, dealing with certain actions which, though bad in themselves, admit of pity and forgiveness because they were committed involuntarily, through ignorance, instances 'the man who did not know a subject was forbidden, like Aeschylus with the Mysteries,' and 'the man who only meant to show how it worked, like the fellow who let off the catapult' ([Greek: e deixai Boulemos apheinai, os o ton katapelten]).

I feel comfortably sure, Gentlemen, that in a previous course of lectures "On the Art of Writing", unlike Aeschylus, I divulged no mysteries: but I am troubled with speculations over that man and the catapult, because I really was trying to tell you how the thing worked; and Aristotle, with a reticence which (as Horace afterwards noted) may lend itself to obscurity, tells us neither what happened to that exponent of ballistics, nor to the engine itself, nor to the other person. My discharge, such as it was, at any rate provoked another Professor (emeritus, learned, sagacious, venerable) to retort that the true business of a Chair such as this is to instruct young men how to read rather than how to write. Well, be it so. I accept the challenge.

I propose in this and some ensuing lectures to talk of the Art and Practice of Reading, particularly as applied to English Literature: to discuss on what ground and through what faculties an Author and his Reader meet: to enquire if, or to what extent, Reading of the best Literature can be taught; and supposing it to be taught, if or to what extent it can be examined upon; with maybe an interlude or two, to beguile the way.

The first thing, then, to be noted about the reading of English (with which alone I am concerned) is that for Englishmen it has been made, by Act of Parliament, compulsory.

The next thing to be noted is that in our schools and Colleges and Universities it has been made, by Statute or in practice, all but impossible.

The third step is obvious—to reconcile what we cannot do with what we must: and to that aim I shall, under your patience, direct this and the following lecture. I shall be relieved at all events, and from the outset, of the doubt by which many a Professor, here and elsewhere, has been haunted: I mean the doubt whether there really is such a subject as that of which he proposes to treat. Anything that requires so much human ingenuity as reading English in an English University must be an art.

But I shall be met, of course, by the question 'How is the reading of English made impossible at Cambridge?' and I pause here, on the edge of my subject, to clear away that doubt.

It is no fault of the University.

The late Philip Gilbert Hamerton, whom some remember as an etcher, wrote a book which he entitled (as I think, too magniloquently) "The Intellectual Life." He cast it in the form of letters—'To an Author who kept very Irregular Hours,' 'To a Young Etonian who thought of becoming a Cotton-spinner,' 'To a Young Gentleman who had firmly resolved never to wear anything but a Grey Coat' (but Mr Hamerton couldn't quite have meant that)....