My Autobiography A Fragment 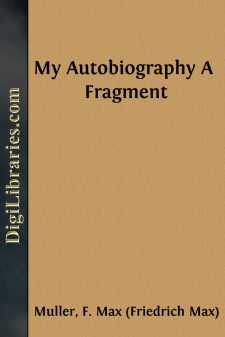 For some years past my father had, in the intervals of more serious work, occupied his leisure moments in jotting down reminiscences of his early life. In 1898 and 1899 he issued the two volumes of Auld Lang Syne, which contained recollections of his friends, but very little about his own life and career. In the Introductory Chapter to the Autobiography he explains fully the reasons which led him, at his advanced age, to undertake the task of writing his own Life, and he began, but alas! too late, to gather together the fragments that he had written at different times. But even during the last two years of his life, and after the first attack of the illness which finally proved fatal, he would not devote himself entirely to what he considered mere recreation, as can be seen from such a work as his Six Systems of Indian Philosophy published in May, 1889, and from the numerous articles which continued to appear up to the very time of his death.

During the last weeks of his life, when we all knew that the end could not be far off, the Autobiography was constantly in his thoughts, and his great desire was to leave as much as possible ready for publication. Even when he was lying in bed far too weak to sit up in a chair, he continued to work at the manuscript with me. I would read portions aloud to him, and he would suggest alterations and dictate additions. I see that we were actually at work on this up to the 19th of October, and on the 28th he was taken to his well-earned rest. One of the last letters that I read to him was a letter from Messrs. Longmans, his lifelong publishers, urging the publication of the fragments of the Autobiography that he had then written.

My father’s object in writing his Autobiography was twofold: firstly, to show what he considered to have been his mission in life, to lay bare the thread that connected all his labours; and secondly, to encourage young struggling scholars by letting them see how it had been possible for one of themselves, without fortune, a stranger in a strange land, to arrive at the position to which he attained, without ever sacrificing his independence, or abandoning the unprofitable and not very popular subjects to which he had determined to devote his life.

Unfortunately the last chapter takes us but little beyond the threshold of his career. There is enough, however, to enable us to see how from his earliest student days his leanings were philosophical and religious rather than classical; how the study of Herbart’s philosophy encouraged him in the work in which he was engaged as a mere student, the Science of Language and Etymology; how his desire to know something special, that no other philosopher would know, led him to explore the virgin fields of Oriental literature and religions. With this motive he began the study of Arabic, Persian, and finally Sanskrit, devoting himself more especially to the latter under Brockhaus and Rückert, and subsequently under Burnouf, who persuaded him to undertake the colossal work of editing the Rig-veda....