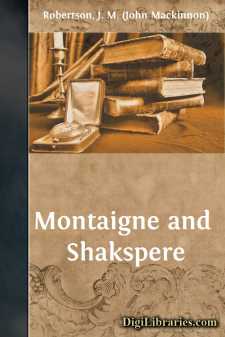 For a good many years past the anatomic study of Shakspere, of which a revival seems now on foot, has been somewhat out of fashion, as compared with its vogue in the palmy days of the New Shakspere Society in England, and the years of the battle between the iconoclasts and the worshippers in Germany. When Mr. Fleay and Mr. Spedding were hard at work on the metrical tests; when Mr. Spedding was subtly undoing the chronological psychology of Dr. Furnivall; when the latter student was on his part undoing in quite another style some of the judgments of Mr. Swinburne; and when Mr. Halliwell-Phillipps was with natural wrath calling on Mr. Browning, as President of the Society, to keep Dr. Furnivall in order, we (then) younger onlookers felt that literary history was verily being made. Our sensations, it seemed, might be as those of our elders had been over Mr. Collier's emendated folio, and the tragical end thereof. Then came a period of lull in things Shaksperean, partly to be accounted for by the protrusion of the Browning Society and kindred undertakings. It seemed as if once more men had come to the attitude of 1850, when Mr. Phillipps had written: "An opinion has been gaining ground, and has been encouraged by writers whose judgment is entitled to respectful consideration, that almost if not all the commentary on the works of Shakspere of a necessary and desirable kind has already been given to the world." And, indeed, so much need was there for time to digest the new criticism that it may be doubted whether among the general cultured public the process is even now accomplished.

To this literary phase in particular, and to our occupation with other studies in general, may be attributed the opportunity which still exists for the discussion of one of the most interesting of all problems concerning Shakspere. Mr. Browning, Mr. Meredith, Ibsen, Tolstoi—a host of peculiarly modern problem-makers have been exorcising our not inexhaustible taste for the problematic, so that there was no very violent excitement over even the series of new "Keys" to the sonnets which came forth in the lull of the analysis of the plays; and yet, even with all the problems of modernity in view, it seems as if it must be rather by accident of oversight than for lack of interest in new developments of Shakspere-study that so little attention has been given among us to a question which, once raised, has a very peculiar literary and psychological attraction of its own—the subject, namely, of the influence which the plays show their author to have undergone from the Essays of Montaigne.

As to the bare fact of the influence, there can be little question. That Shakspere in one scene in the Tempest versifies a passage from the prose of Florio's translation of Montaigne's chapter Of the Cannibals has been recognised by all the commentators since Capell (1767), who detected the transcript from a reading of the French only, not having compared the translation. The first thought of students was to connect the passage with Ben Johnson's allusion in Volpone to frequent "stealings from Montaigne" by contemporary writers; and though Volpone dates from 1605, and the Tempest from 1610-1613, there has been no systematic attempt to apply the clue chronologically....