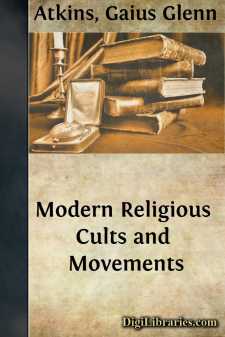 The last thirty years, though as dates go this is only an approximation, have witnessed a marked development of religious cults and movements largely outside the lines of historic Catholicism and Protestantism. One of these cults is strongly organized and has for twenty years grown more rapidly in proportion than most of the Christian communions. The influence of others, more loosely organized, is far reaching. Some of them attempt to give a religious content to the present trend of science and philosophy, and, generally, they represent the free movement of what one may call the creative religious consciousness of our time.

There is, of course, a great and constantly growing literature dealing with particular cults, but there has been as yet apparently no attempt to inquire whether there may not be a few unexpectedly simple centers around which, in spite of their superficial differences, they really organize themselves.

What follows is an endeavour in these directions. It is really a very great task and can at the best be only tentatively done. Whoever undertakes it may well begin by confessing his own limitations. Contemporaneous appraisals of movements upon whose tides we ourselves are borne are subject to constant revision. One's own prejudices, no matter how strongly one may deal with them, colour one's conclusions, particularly in the region of religion. The really vast subject matter also imposes its own limitations upon even the most sincere student unless he has specialized for a lifetime in his theme; even then he would need to ask the charity of his readers.

Ground has been broken for such an endeavour in many different directions. Broadly considered, William James' "Varieties of Religious Experience" was perhaps the pioneer work. Professor James' suggestive analyses recognize the greatly divergent forms religious experience may take and establish their right to be taken seriously as valid facts for the investigator. The whole tendency of organized Christianity—and Protestantism more largely than Catholicism—has been to narrow religious experience to accepted forms, but religion itself is impatient of forms. It has its border-lands, shadowy regions which lie between the acceptance of what Sabatier calls "the religions of authority" on the one hand and the conventional types of piety or practical goodness on the other. Those who find their religion in such regions—one might perhaps call them the border-land people—discover the authority for their faith in philosophies which, for the most part, have not the sanction of the schools and the demonstration of the reality of their faith in personal experience for which there is very little proof except their own testimony—and their testimony itself is often confused enough.

But James made no attempt to relate his governing conceptions to particular organizations and movements save in the most general way. His fundamentals, the distinction he draws between the "once-born" and the "twice-born," between the religion of healthy-mindedness and the need of the sick soul, the psychological bases which he supplies for conversation and the rarer religious experiences are immensely illuminating, but all this is only the nebulæ out of which religions are organized into systems; the systems still remain to be considered....