Modern Painters Volume I (of V) 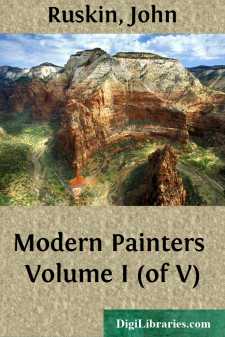 The work now laid before the public originated in indignation at the shallow and false criticism of the periodicals of the day on the works of the great living artist to whom it principally refers. It was intended to be a short pamphlet, reprobating the matter and style of those critiques, and pointing out their perilous tendency, as guides of public feeling. But, as point after point presented itself for demonstration, I found myself compelled to amplify what was at first a letter to the Editor of a Review, into something very like a treatise on art, to which I was obliged to give the more consistency and completeness, because it advocated opinions which, to the ordinary connoisseur, will sound heretical. I now scarcely know whether I should announce it is an Essay on Landscape Painting, and apologize for its frequent reference to the works of a particular master; or, announcing it as a critique on particular works, apologize for its lengthy discussion of general principles. But of whatever character the work may be considered, the motives which led me to undertake it must not be mistaken. No zeal for the reputation of any individual, no personal feeling of any kind, has the slightest weight or influence with me. The reputation of the great artist to whose works I have chiefly referred, is established on too legitimate grounds among all whose admiration is honorable, to be in any way affected by the ignorant sarcasms of pretension and affectation. But when public taste seems plunging deeper and deeper into degradation day by day, and when the press universally exerts such power as it possesses to direct the feeling of the nation more completely to all that is theatrical, affected, and false in art; while it vents its ribald buffooneries on the most exalted truth, and the highest ideal of landscape, that this or any other age has ever witnessed, it becomes the imperative duty of all who have any perception or knowledge of what is really great in art, and any desire for its advancement in England, to come fearlessly forward, regardless of such individual interests as are likely to be injured by the knowledge of what is good and right, to declare and demonstrate, wherever they exist, the essence and the authority of the Beautiful and the True.

Whatever may seem invidious or partial in the execution of my task is dependent not so much on the tenor of the work, as on its incompleteness. I have not entered into systematic criticism of all the painters of the present day; but I have illustrated each particular excellence and truth of art by the works in which it exists in the highest degree, resting satisfied that if it be once rightly felt and enjoyed in these, it will be discovered and appreciated wherever it exists in others. And although I have never suppressed any conviction of the superiority of one artist over another, which I believed to be grounded on truth, and necessary to the understanding of truth, I have been cautious never to undermine positive rank, while I disputed relative rank. My uniform desire and aim have been, not that the present favorite should be admired less, but that the neglected master should be admired more. And I know that an increased perception and sense of truth and beauty, though it may interfere with our estimate of the comparative rank of painters, will invariably tend to increase our admiration of all who are really great; and he who now places Stanfield and Callcott above Turner, will admire Stanfield and Callcott more than he does now, when he has learned to place Turner far above them both.

In three instances only have I spoken in direct depreciation of the works of living artists, and these are all cases in which the reputation is so firm and extended, as to suffer little injury from the opinion of an individual, and where the blame has been warranted and deserved by the desecration of the highest powers.

Of the old masters I have spoken with far greater freedom; but let it be remembered that only a portion of the work is now presented to the public, and it must not be supposed, because in that particular portion, and with reference to particular excellencies, I have spoken in constant depreciation, that I have no feeling of other excellencies of which cognizance can only be taken in future parts of the work. Let me not be understood to mean more than I have said, nor be made responsible for conclusions when I have only stated facts. I have said that the old masters did not give the truth of Nature; if the reader chooses, thence, to infer that they were not masters at all, it is his conclusion, not mine.

Whatever I have asserted throughout the work, I have endeavored to ground altogether on demonstrations which must stand or fall by their own strength, and which ought to involve no more reference to authority or character than a demonstration in Euclid. Yet it is proper for the public to know, that the writer is no mere theorist, but has been devoted from his youth to the laborious study of practical art.

Whatever has been generally affirmed of the old schools of landscape-painting is founded on familiar acquaintance with every important work of art, from Antwerp to Naples. But it would be useless, where close and immediate comparison with works in our own Academy is desirable, to refer to the details of pictures at Rome or Munich; and it would be impossible to speak at once with just feeling, as regarded the possessor, and just freedom, as regarded the public, of pictures in private galleries....