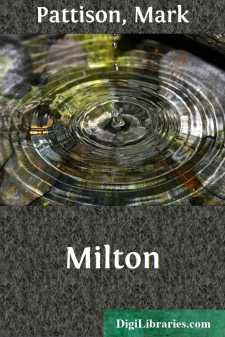 In the seventeenth century it was not the custom to publish two volumes upon every man or woman whose name had appeared on a title-page. Nor, where lives of authors were written, were they written with the redundancy of particulars which is now allowed. Especially are the lives of the poets and dramatists obscure and meagrely recorded. Of Milton, however, we know more personal details than of any man of letters of that age. Edward Phillips, the poet's nephew, who was brought up by his uncle, and lived in habits of intercourse with him to the last, wrote a life, brief, inexact, superficial, but valuable from the nearness of the writer to the subject of his memoir. A cotemporary of Milton, John Aubrey (b.1625), "a very honest man, and accurate in his accounts of matters of fact," as Toland says of him, made it his business to learn all he could about Milton's habits. Aubrey was himself acquainted with Milton, and diligently catechised thepoet's widow, his brother, and his nephew, scrupulously writing down each detail as it came to him, in the minutee of lives which he supplied to Antony Wood to be worked up in his Athenae and Fasti. Aubrey was only an antiquarian collector, and was mainly dependent on what could be learned from the family. None of Milton's family, and least of all Edward Phillips, were of a capacity to apprehend moral or mental qualities, and they could only tell Aubrey of his goings out and his comings in, of the clothes he wore, the dates of events, the names of his acquaintance. In compensation for the want of observation on the part of his own kith and kin, Milton himself, with a superb and ingenuous egotism, has revealed the secret of his thoughts and feelings in numerous autobiographical passages of his prose writings. From what he directly communicates, and from what he unconsciously betrays, we obtain an internal life of the mind, more ample than that external life of the bodily machine, which we owe to Aubrey and Phillips.

In our own generation all that printed books or written documents have preserved about Milton has been laboriously brought together by Professor David Masson, in whose Life of Milton we have the most exhaustive biography that ever was compiled of any Englishman. It is a noble and final monument erected to the poet's memory, two centuries after his death. My excuse for attempting to write of Milton alter Mr. Masson is that his life is in six volumes octavo, with a total of some four to five thousand pages. The present outline is written for a different class of readers, those, namely, who cannot afford to know more of Milton than can be told in some two hundred and fifty pages.

A family of Miltons, deriving the name in all probability from the parish of Great Milton near Thame, is found in various branches spread over Oxfordshire and the adjoining counties in the reign of Elisabeth. The poet's grandfather was a substantial yeoman, living at Stanton St. John, about five miles from Oxford, within the forest of Shotover, of which he was also an under-ranger....