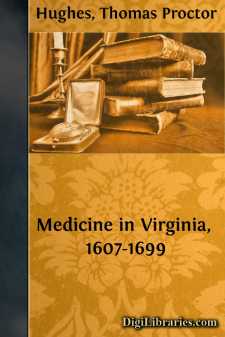 The origins of medical theory and practice in this nation extend further than the settlement at Jamestown in 1607. Jamestown was a seed carried from the Old World and planted in the New; medicine was one of the European characteristics transmitted with the seed across the Atlantic. In the process of transmission changes took place, and in the New World medicine adapted itself to some circumstances unknown to Europe; but the contact with European developments in theory and practice was never—and is not—broken.

Because of this relationship between European and American medicine, an acquaintance with seventeenth-century European medicine makes it possible to give additional support to some of the information in the early sources about medicine in colonial Virginia. In addition, knowledge of the European background allows reasonable speculation as to what happened in Virginia when the early sources are silent.

In discussing the background for American medicine it is not necessary to make a firm distinction between England and the rest of Europe. As today, science—in this case, medical science—frequently ignored national boundaries. The same theories relative to the structure of the body (anatomy), to the functions of the organs and parts of the body (physiology), and to other branches of medical science were common to England and Europe. Medical practice, like theory, varied but in detail from nation to nation in Western Europe.

Seventeenth-century Europe relied heavily upon ancient authority in the realm of medical theory. The European and colonial Virginia physician, surgeon, and even barber (when functioning as a medical man) consciously or unconsciously drew upon, or practiced according to, theories originated or developed by Hippocrates (460-377 B.C.) and Galen (131-201 A.D.). Hippocrates is remembered not only for his emphasis upon ethical practices but also for his inquiring and scientific spirit, and Galen as the founder of experimental physiology and as the formulator of ingenious medical theories. Most often Hippocrates was studied in Galen's commentaries.

No longer do scholars or physicians scoff at the ancient authorities who dominated medical thinking for so many centuries. The seventeenth-century physician striving to reduce the frightful inroads that disease made into the colony at Jamestown may have been handicapped by the erroneous doctrines of the gossamer-fine a priori speculation of Galen, but the physicians to a large extent practiced according to a science rather than to superstition and magic—because the voluminous writings of Galen survived the centuries. Nor would the European physician, or his Virginia counterpart, have demonstrated the same appreciation for close observation if Hippocrates had not still been an influence.

In the realm of pathology (the nature, causes, and manifestations of disease) the humoral theory, with its many variations, was extremely popular....