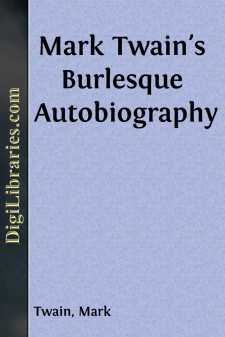 Two or three persons having at different times intimated that if I would write an autobiography they would read it, when they got leisure, I yield at last to this frenzied public demand, and herewith tender my history:

Ours is a noble old house, and stretches a long way back into antiquity. The earliest ancestor the Twains have any record of was a friend of the family by the name of Higgins. This was in the eleventh century, when our people were living in Aberdeen, county of Cork, England. Why it is that our long line has ever since borne the maternal name (except when one of them now and then took a playful refuge in an alias to avert foolishness), instead of Higgins, is a mystery which none of us has ever felt much desire to stir. It is a kind of vague, pretty romance, and we leave it alone. All the old families do that way.

Arthour Twain was a man of considerable note—a solicitor on the highway in William Rufus' time. At about the age of thirty he went to one of those fine old English places of resort called Newgate, to see about something, and never returned again. While there he died suddenly.

Augustus Twain, seems to have made something of a stir about the year 1160. He was as full of fun as he could be, and used to take his old sabre and sharpen it up, and get in a convenient place on a dark night, and stick it through people as they went by, to see them jump. He was a born humorist. But he got to going too far with it; and the first time he was found stripping one of these parties, the authorities removed one end of him, and put it up on a nice high place on Temple Bar, where it could contemplate the people and have a good time. He never liked any situation so much or stuck to it so long.

Then for the next two hundred years the family tree shows a succession of soldiers—noble, high-spirited fellows, who always went into battle singing; right behind the army, and always went out a-whooping, right ahead of it.

This is a scathing rebuke to old dead Froissart's poor witticism that our family tree never had but one limb to it, and that that one stuck out at right angles, and bore fruit winter, and summer.

Early in the fifteenth century we have Beau Twain, called "the Scholar." He wrote a beautiful, beautiful hand. And he could imitate anybody's hand so closely that it was enough to make a person laugh his head off to see it. He had infinite sport with his talent. But by and by he took a contract to break stone for a road, and the roughness of the work spoiled his hand. Still, he enjoyed life all the time he was in the stone business, which, with inconsiderable intervals, was some forty-two years. In fact, he died in harness. During all those long years he gave such satisfaction that he never was through with one contract a week till government gave him another. He was a perfect pet. And he was always a favorite with his fellow-artists, and was a conspicuous member of their benevolent secret society, called the Chain Gang....