Little Masterpieces of American Wit and Humor Volume I 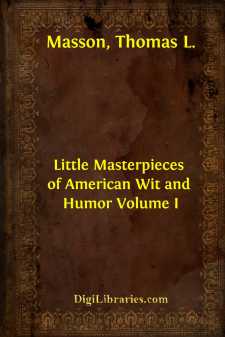 It was in the year of our Lord 1629 that Mynheer Wouter Van Twiller was appointed Governor of the province of Nieuw Nederlandts, under the commission and control of their High Mightinesses the Lords States General of the United Netherlands, and the privileged West India Company.

This renowned old gentleman arrived at New Amsterdam in the merry month of June, the sweetest month in all the year; when dan Apollo seems to dance up the transparent firmament—when the robin, the thrush, and a thousand other wanton songsters make the woods to resound with amorous ditties, and the luxurious little bob-lincon revels among the clover blossoms of the meadows—all which happy coincidences persuaded the old dames of New Amsterdam, who were skilled in the art of foretelling events, that this was to be a happy and prosperous administration.

The renowned Wouter (or Walter) Van Twiller was descended from a long line of Dutch burgomasters, who had successively dozed away their lives and grown fat upon the bench of magistracy in Rotterdam, and who had comported themselves with such singular wisdom and propriety that they were never either heard or talked of—which, next to being universally applauded, should be the object of ambition of all magistrates and rulers. There are two opposite ways by which some men make a figure in the world; one, by talking faster than they think, and the other, by holding their tongues and not thinking at all. By the first, many a smatterer acquires the reputation of a man of quick parts; by the other, many a dunderpate, like the owl, the stupidest of birds, comes to be considered the very type of wisdom. This, by the way, is a casual remark, which I would not, for the universe, have it thought I apply to Governor Van Twiller. It is true he was a man shut up within himself, like an oyster, and rarely spoke, except in monosyllables; but then it was allowed he seldom said a foolish thing. So invincible was his gravity that he was never known to laugh or even to smile through the whole course of a long and prosperous life. Nay, if a joke were uttered in his presence that set light-minded hearers in a roar, it was observed to throw him into a state of perplexity. Sometimes he would deign to inquire into the matter, and when, after much explanation, the joke was made as plain as a pike-staff, he would continue to smoke his pipe in silence, and at length, knocking out the ashes, would exclaim, "Well, I see nothing in all that to laugh about."

With all his reflective habits, he never made up his mind on a subject. His adherents accounted for this by the astonishing magnitude of his ideas. He conceived every subject on so grand a scale that he had not room in his head to turn it over and examine both sides of it. Certain it is that, if any matter were propounded to him on which ordinary mortals would rashly determine at first glance, he would put on a vague, mysterious look, shake his capacious head, smoke some time in profound silence, and at length observe that "he had his doubts about the matter"; which gained him the reputation of a man slow of belief and not easily imposed upon. What is more, it gained him a lasting name; for to this habit of the mind has been attributed his surname of Twiller; which is said to be a corruption of the original Twijfler, or, in plain English, Doubter.

The person of this illustrious old gentleman was formed and proportioned as though it had been molded by the hands of some cunning Dutch statuary, as a model of majesty and lordly grandeur. He was exactly five feet six inches in height, and six feet five inches in circumference. His head was a perfect sphere, and of such stupendous dimensions that Dame Nature, with all her sex's ingenuity, would have been puzzled to construct a neck capable of supporting it; wherefore she wisely declined the attempt, and settled it firmly on the top of his backbone, just between the shoulders. His body was oblong, and particularly capacious at bottom; which was wisely ordered by Providence seeing that he was a man of sedentary habits, and very averse to the idle labor of walking....