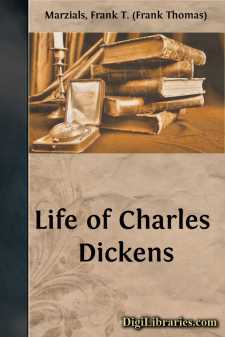 Education is a kind of lottery in which there are good and evil chances, and some men draw blanks and other men draw prizes. And in saying this I do not use the word education in any restricted sense, as applying exclusively to the course of study in school or college; nor certainly, when I speak of prizes, am I thinking of scholarships, exhibitions, fellowships. By education I mean the whole set of circumstances which go to mould a man's character during the apprentice years of his life; and I call that a prize when those circumstances have been such as to develop the man's powers to the utmost, and to fit him to do best that of which he is best capable. Looked at in this way, Charles Dickens' education, however untoward and unpromising it may often have seemed while in the process, must really be pronounced a prize of value quite inestimable.

His father, John Dickens, held a clerkship in the Navy Pay Office, and was employed in the Portsmouth Dockyard when little Charles first came into the world, at Landport, in Portsea, on February 7, 1812. Wealth can never have been one of the familiar friends of the household, nor plenty have always sat at its board. Charles had one elder sister, and six other brothers and sisters were afterwards added to the family; and with eight children, and successive removals from Portsmouth to London, and London to Chatham, and no more than the pay of a Government clerk—pay which not long afterwards dwindled to a pension,—even a better domestic financier than the elder Dickens might have found some difficulty in facing his liabilities. It was unquestionably into a tottering house that the child was born, and among its ruins that he was nurtured.

But through all these early years I can do nothing better than take him for my guide, and walk as it were in his companionship. Perhaps no novelist ever had a keener feeling of the pathos of childhood than Dickens, or understood more fully how real and overwhelming are its sorrows. No one, too, has entered more sympathetically into its ways. And of the child and boy that he himself had once been, he was wont to think very tenderly and very often. Again and again in his writings he reverts to the scenes and incidents and emotions of his earlier days. Sometimes he goes back to his young life directly, speaking as of himself. More often he goes back to it indirectly, placing imaginary children and boys in the position he had once occupied. Thus it is almost possible, by judiciously selecting from his works, and using such keys as we possess, to construct as it were a kind of autobiography. Nor, if we make due allowance for the great writer's tendency to idealize the past, and intensify its humorous and pathetic aspects, need we at all fear that the self-written story of his life should convey a false impression.

He was but two years old when his father left Portsea for London, and but four when a second migration took the family to Chatham. Here we catch our first glimpse of him, in his own word-painting, as a "very queer small boy," a small boy who was sickly and delicate, and could take but little part in the rougher sports of his school companions, but read much, as sickly boys will—read the novels of the older novelists in a "blessed little room," a kind of palace of enchantment, where "'Roderick Random,' 'Peregrine Pickle,' 'Humphrey Clinker,' 'Tom Jones,' 'The Vicar of Wakefield,' 'Don Quixote, 'Gil Blas,' and 'Robinson Crusoe,' came out, a glorious host, to keep him company." And the queer small boy had read Shakespeare's "Henry IV.," too, and knew all about Falstaff's robbery of the travellers at Gad's Hill, on the rising ground between Rochester and Gravesend, and all about mad Prince Henry's pranks; and, what was more, he had determined that when he came to be a man, and had made his way in the world, he should own the house called Gad's Hill Place, with the old associations of its site, and its pleasant outlook over Rochester and over the low-lying levels by the Thames....