Lectures on Art Delivered before the University of Oxford in Hilary term, 1870 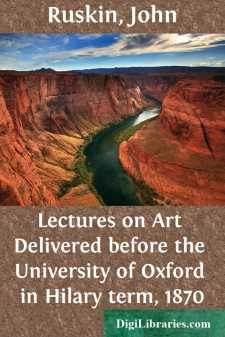 The following lectures were the most important piece of my literary work done with unabated power, best motive, and happiest concurrence of circumstance. They were written and delivered while my mother yet lived, and had vividest sympathy in all I was attempting;—while also my friends put unbroken trust in me, and the course of study I had followed seemed to fit me for the acceptance of noble tasks and graver responsibilities than those only of a curious traveler, or casual teacher.

Men of the present world may smile at the sanguine utterances of the first four lectures: but it has not been wholly my own fault that they have remained unfulfilled; nor do I retract one word of hope for the success of other masters, nor a single promise made to the sincerity of the student's labor, on the lines here indicated. It would have been necessary to my success, that I should have accepted permanent residence in Oxford, and scattered none of my energy in other tasks. But I chose to spend half my time at Coniston Waterhead; and to use half my force in attempts to form a new social organization,—the St. George's Guild,—which made all my Oxford colleagues distrustful of me, and many of my Oxford hearers contemptuous. My mother's death in 1871, and that of a dear friend in 1875, took away the personal joy I had in anything I wrote or designed: and in 1876, feeling unable for Oxford duty, I obtained a year's leave of rest, and, by the kind and wise counsel of Prince Leopold, went to Venice, to reconsider the form into which I had cast her history in the abstract of it given in the "Stones of Venice."

The more true and close view of that history, begun in "St. Mark's Rest," and the fresh architectural drawings made under the stimulus of it, led me forward into new fields of thought, inconsistent with the daily attendance needed by my Oxford classes; and in my discontent with the state I saw them in, and my inability to return to their guidance without abandonment of all my designs of Venetian and Italian history, began the series of vexations which ended in the very nearly mortal illness of 1878.

Since, therefore, the period of my effective action in Oxford was only from 1870 to 1875, it can scarcely be matter of surprise or reproof that I could not in that time obtain general trust in a system of teaching which, though founded on that of Da Vinci and Reynolds, was at variance with the practice of all recent European academy schools; nor establish—on the unassisted resources of the Slade Professorship—the schools of Sculpture, Architecture, Metal-work, and manuscript Illumination, of which the design is confidently traced in the four inaugural lectures.

In revising the book, I have indicated as in the last edition of the "Seven Lamps," passages which the student will find generally applicable, and in all their bearings useful, as distinguished from those regarding only their immediate subject. The relative importance of these broader statements, I again indicate by the use of capitals or italics; and if the reader will index the sentences he finds useful for his own work, in the blank pages left for that purpose at the close of the volume, he will certainly get more good of them than if they had been grouped for him according to the author's notion of their contents....