Lectures on Architecture and Painting Delivered at Edinburgh in November 1853 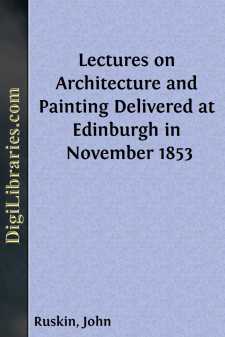 The following Lectures are printed, as far as possible, just as they were delivered. Here and there a sentence which seemed obscure has been mended, and the passages which had not been previously written, have been, of course imperfectly, supplied from memory. But I am well assured that nothing of any substantial importance which was said in the lecture-room, is either omitted, or altered in its signification; with the exception only of a few sentences struck out from the notice of the works of Turner, in consequence of the impossibility of engraving the drawings by which they were illustrated, except at a cost which would have too much raised the price of the volume. Some elucidatory remarks have, however, been added at the close of the second and fourth Lectures, which I hope may be of more use than the passages which I was obliged to omit.

The drawings by which the Lectures on Architecture were illustrated have been carefully reduced, and well transferred to wood by Mr. Thurston Thompson. Those which were given in the course of the notices of schools of painting could not be so transferred, having been drawn in color; and I have therefore merely had a few lines, absolutely necessary to make the text intelligible, copied from engravings.

I forgot, in preparing the second Lecture for the press, to quote a passage from Lord Lindsay's "Christian Art," illustrative of what is said in that lecture (§ 52), respecting the energy of the mediæval republics. This passage, describing the circumstances under which the Campanile of the Duomo of Florence was built, is interesting also as noticing the universality of talent which was required of architects; and which, as I have asserted in the Addenda (§ 60), always ought to be required of them. I do not, however, now regret the omission, as I cannot easily imagine a better preface to an essay on civil architecture than this simple statement.

"In 1332, Giotto was chosen to erect it (the Campanile), on the ground, avowedly, of the universality of his talents, with the appointment of Capo Maestro, or chief Architect (chief Master I should rather write), of the Cathedral and its dependencies, a yearly salary of one hundred gold florins, and the privilege of citizenship, under the special understanding that he was not to quit Florence. His designs being approved of, the republic passed a decree in the spring of 1334, that the Campanile should be built so as to exceed in magnificence, height, and excellence of workmanship whatever in that time had been achieved by the Greeks and Romans in the time of their utmost power and greatness. The first stone was laid, accordingly, with great pomp, on the 18th of July following, and the work prosecuted with vigor, and with such costliness and utter disregard of expense, that a citizen of Verona, looking on, exclaimed that the republic was taxing her strength too far, that the united resources of two great monarchs would be insufficient to complete it; a criticism which the Signoria resented by confining him for two months in prison, and afterwards conducting him through the public treasury, to teach him that the Florentines could build their whole city of marble, and not one poor steeple only, were they so inclined."

I see that "The Builder," vol. xi. page 690, has been endeavoring to inspire the citizens of Leeds with some pride of this kind respecting their town-hall. The pride would be well, but I sincerely trust that the tower in question may not be built on the design there proposed. I am sorry to have to write a special criticism, but it must be remembered that the best works, by the best men living, are in this age abused without mercy by nameless critics; and it would be unjust to the public, if those who have given their names as guarantee for their sincerity never had the courage to enter a protest against the execution of designs which appear to them unworthy....