James VI and the Gowrie Mystery 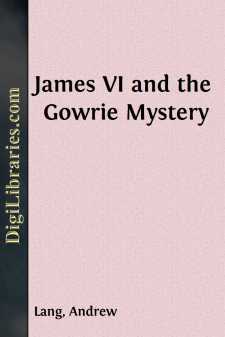 An old Scottish lady, four generations ago, used to say, ‘It is a great comfort to think that, at the Day of Judgment, we shall know the whole truth about the Gowrie Conspiracy at last.’  Since the author, as a child, read ‘The Tales of a Grandfather,’ and shared King Jamie’s disappointment when there was no pot of gold, but an armed man, in the turret, he had supposed that we do know all about the Gowrie Conspiracy, that it was a plot to capture the King, carry him to Fastcastle, and ‘see how the country would take it,’ as in the case of the Gunpowder Plot.  But just as Father Gerard has tried to show that the Gunpowder affair may have been Cecil’s plot, so modern historians doubt whether the Gowrie mystery was not a conspiracy by King James himself.  Mr. Hume Brown appears rather to lean to this opinion, in the second volume of his ‘History of Scotland,’ and Dr. Masson, in his valuable edition of the ‘Register of the Privy Council,’ is also dubious.  Mr. Louis Barbé, in his ‘Tragedy of Gowrie House,’ holds a brief against the King.  Thus I have been tempted to study this ‘auld misterie’ afresh, and have convinced myself that such historians as Sir Walter Scott, Mr. Frazer Tytler, and Mr. Hill Burton were not wrong; the plot was not the King’s conspiracy, but the desperate venture of two very young men.  The precise object remains obscure in detail, but the purpose was probably to see how a deeply discontented Kirk and country ‘would take it.’

In working at this fascinatingly mysterious puzzle, I have made use of manuscript materials hitherto uncited.  The most curious of these, the examinations and documents of the ‘country writer,’ Sprot, had been briefly summarised in Sir William Fraser’s ‘Memorials of the Earls of Haddington.’  My attention was drawn to this source by the Rev. John Anderson, of the General Register House, who aided Sir William Fraser in the compilation of his book.  The Earl of Haddington generously permitted me to have copies made of the documents, which Lady Cecily Baillie-Hamilton was kind enough to search for and rediscover in an enormous mass of documents bequeathed by the learned first Earl.

On reading the Calendars of the Hatfield MSS. I had observed that several letters by the possible conspirator, Logan of Restalrig, were in the possession of the Marquis of Salisbury, who was good enough to permit photographs of some specimens to be taken.  These were compared, by Mr. Anderson, with the alleged plot-letters of Logan at Edinburgh; while photographs of the plot-letters were compared with Logan’s authentic letters at Hatfield, by Mr. Gunton, to whose acuteness and energy I owe the greatest gratitude.  The results of the comparison settle the riddle of three centuries.

The other hitherto unused manuscripts are in no more recondite place than the Record Office in London, and I do not know how they managed to escape the notice of previous writers on the subject.  To Dr. Masson’s ‘Register of the Privy Council’ I am indebted for the sequel of the curious adventure of Mr. Robert Oliphant, whose part in the mystery, hitherto overlooked, is decisive, if we accept the evidence—a point on which the reader must form his own opinion.  For copies made at the Record Office I have to thank the care and accuracy of Miss E. M. Thompson.

To Mr. Anderson’s learning and zest in this ‘longest and sorest chase’ (as King James called his hunt on the morning of the fatal August 5) I am under the deepest obligations.  The allurements of a romantic conclusion have never tempted him to leave the strait path of historical impartiality.

I have also to thank Mr. Henry Paton for his careful copies of the Haddington MSS., extracts from the Treasurer’s accounts, and other researches.

For permission to reproduce the picture of Fastcastle by the Rev. Mr. Thomson of Duddingston, I have to thank the kindness of Mrs. Blackwood-Porter.  The painting, probably of about 1820, when compared with the photograph of to-day, shows the destruction wrought by wind and weather in the old fortalice....