Introduction to the Compleat Angler 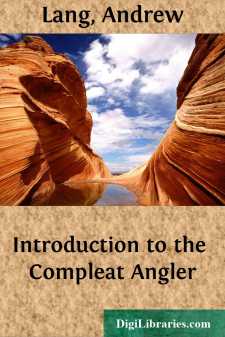 The few events in the long life of Izaak Walton have been carefully investigated by Sir Harris Nicolas.  All that can be extricated from documents by the alchemy of research has been selected, and I am unaware of any important acquisitions since Sir Harris Nicolas’s second edition of 1860.  Izaak was of an old family of Staffordshire yeomen, probably descendants of George Walton of Yoxhall, who died in 1571.  Izaak’s father was Jarvis Walton, who died in February 1595-6; of Izaak’s mother nothing is known.  Izaak himself was born at Stafford, on August 9, 1593, and was baptized on September 21.  He died on December 15, 1683, having lived in the reigns of Elizabeth, James I., Charles I., under the Commonwealth, and under Charles II.  The anxious and changeful age through which he passed is in contrast with his very pacific character and tranquil pursuits.

Of Walton’s education nothing is known, except on the evidence of his writings.  He may have read Latin, but most of the books he cites had English translations.  Did he learn his religion from ‘his mother or his nurse’?  It will be seen that the free speculation of his age left him untouched: perhaps his piety was awakened, from childhood, under the instruction of a pious mother.  Had he been orphaned of both parents (as has been suggested) he might have been less amenable to authority, and a less notable example of the virtues which Anglicanism so vainly opposed to Puritanismism.  His literary beginnings are obscure.  There exists a copy of a work, The Loves of Amos and Laura, written by S. P., published in 1613, and again in 1619.  The edition of 1619 is dedicated to ‘Iz. Wa.’:—

‘Thou being cause it is as now it is’;

the Dedication does not occur in the one imperfect known copy of 1613.  Conceivably the words, ‘as now it is’ refer to the edition of 1619, which might have been emended by Walton’s advice.  But there are no emendations, hence it is more probable that Walton revised the poem in 1613, when he was a man of twenty, or that he merely advised the author to publish:—

‘For, hadst thou held thy tongue, by silence mightThese have been buried in oblivion’s night.’

‘No ill thing can be clothed in thy verse’;

hence Izaak was already a rhymer, and a harmless one, under the Royal Prentice, gentle King Jamie.

By this time Walton was probably settled in London.  A deed in the possession of his biographer, Dr. Johnson’s friend, Sir John Hawkins, shows that, in 1614, Walton held half of a shop on the north side of Fleet Street, two doors west of Chancery Lane: the other occupant was a hosier.  Mr. Nicholl has discovered that Walton was made free of the Ironmongers’ Company on Nov. 12, 1618.  He is styled an Ironmonger in his marriage licence.  The facts are given in Mr. Marston’s Life of Walton, prefixed to his edition of The Compleat Angler (1888).  It is odd that a prentice ironmonger should have been a poet and a critic of poetry.  Dr....