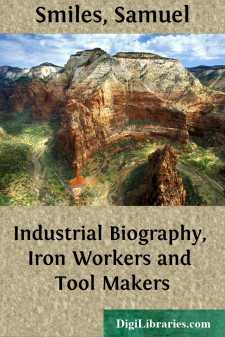 CHAPTER I. IRON AND CIVILIZATION.

"Iron is not only the soul of every other manufacture, but the main spring perhaps of civilized society."—FRANCIS HORNER.

"Were the use of iron lost among us, we should in a few ages be unavoidably reduced to the wants and ignorance of the ancient savage Americans; so that he who first made known the use of that contemptible mineral may be truly styled the father of Arts and the author of Plenty."—JOHN LOCKE.

When Captain Cook and the early navigators first sailed into the South Seas on their voyages of discovery, one of the things that struck them with most surprise was the avidity which the natives displayed for iron. "Nothing would go down with our visitors," says Cook, "but metal; and iron was their beloved article." A nail would buy a good-sized pig; and on one occasion the navigator bought some four hundred pounds weight of fish for a few wretched knives improvised out of an old hoop.

"For iron tools," says Captain Carteret, "we might have purchased everything upon the Freewill Islands that we could have brought away. A few pieces of old iron hoop presented to one of the natives threw him into an ecstasy little short of distraction." At Otaheite the people were found generally well-behaved and honest; but they were not proof against the fascinations of iron. Captain Cook says that one of them, after resisting all other temptations, "was at length ensnared by the charms of basket of nails." Another lurked about for several days, watching the opportunity to steal a coal-rake.

The navigators found they could pay their way from island to island merely with scraps of iron, which were as useful for the purpose as gold coins would have been in Europe. The drain, however, being continuous, Captain Cook became alarmed at finding his currency almost exhausted; and he relates his joy on recovering an old anchor which the French Captain Bougainville had lost at Bolabola, on which he felt as an English banker would do after a severe run upon him for gold, when suddenly placed in possession of a fresh store of bullion.

The avidity for iron displayed by these poor islanders will not be wondered at when we consider that whoever among them was so fortunate as to obtain possession of an old nail, immediately became a man of greater power than his fellows, and assumed the rank of a capitalist. "An Otaheitan chief," says Cook, "who had got two nails in his possession, received no small emolument by letting out the use of them to his neighbours for the purpose of boring holes when their own methods failed, or were thought too tedious."

The native methods referred to by Cook were of a very clumsy sort; the principal tools of the Otaheitans being of wood, stone, and flint. Their adzes and axes were of stone. The gouge most commonly used by them was made out of the bone of the human forearm. Their substitute for a knife was a shell, or a bit of flint or jasper. A shark's tooth, fixed to a piece of wood, served for an auger; a piece of coral for a file; and the skin of a sting-ray for a polisher....