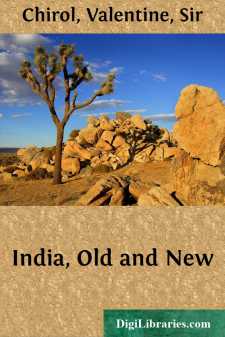 CHAPTER I THE CLASH OF TWO CIVILISATIONS

On February 9, 1921, three hundred and twenty-one years after Queen Elizabeth granted to her trusty "Merchant-venturers" of London the charter out of which the East India Company and the British Empire of India were to grow up, His Royal Highness the Duke of Connaught inaugurated at Delhi, in the King-Emperor's name, the new representative institutions that are to lead India onward towards complete self-government as an equal partner in the British Commonwealth of Nations. To bring home to every Indian the full significance of the occasion, the King-Emperor did not shrink from using in his Royal Message an Indian word which not long ago was held to bear no other than a seditious construction. His Majesty gave it a new and finer meaning. "For years—it may be for generations—patriotic and loyal Indians have dreamed of Swaraj for their motherland. To-day you have the beginnings of Swaraj within my Empire, and the widest scope and ample opportunity for progress to the liberty which my other Dominions enjoy."

It was a bold pronouncement inaugurating another, some say the boldest, of all the many bold adventures which make up the marvellous history of British rule in India. The simplicity, rare in the East, of the ceremony itself enhanced its significance. It was not held, like the opening of the Chamber of Princes, in the splendid Hall of Public Audience in the old Fort where the Moghul Emperors once sat on the Peacock Throne, nor were there the flash of jewels and blaze of colour that faced the Duke when he addressed the feudatory chiefs who still rule their states on ancient lines beyond the limits of direct British administration. The members of the new Indian Legislatures, most of them in sober European attire, though many of them retained their own distinctive head-dress, were assembled within the white and unadorned walls of the temporary building in which they will continue to sit until the statelier home to be built for them in new Delhi is ready to receive them. But Delhi itself with all its age-long memories was around one to provide the historic setting for an historic scene, and Delhi still stands under the sign of the Kutub Minar, the splendid minaret—a landmark for miles and miles around—which dominates the vast graveyard of fallen dynasties at its feet and the whole of the great plain beyond where the fate of India, and not of India alone, has so often been decided.

On that plain were fought out, in prehistoric times, the fierce conflicts of ancient Aryan races, Pandavas and Kauravas, around which the poetic genius of India has woven the wonderful epos of the Mahabharata. Only a couple of miles south of the modern city, the walls of the Purana Kilat, the fortress built by Humayun, cover the site but have not obliterated the ancient name of Indraprasthra, or Indrapat, the city founded by the Pandavas themselves, when Yudhisthira celebrated their final victory by performing on the banks of the Jumna, in token of the Pandava claim to Empire, the Asvamedha, or great Horse Sacrifice, originated by Brahma himself. There too, on a mound beyond Indrapat, stands the granite shaft of one of Asoka's pillars, on which, with a fine faith that the world has never yet justified, the great Buddhist Apostle-Emperor of India inscribed over 2000 years ago his edicts prohibiting the taking of life. At the very foot of the Kutub Minar the famous Iron Pillar commemorates the victories of the "Sun of Power," the Hindu Emperor of the Gupta dynasty with whose name, under the more popular form of Raja Bikram, Indian legend associates the vague memories of a golden age of Hindu civilisation in the fifth and sixth centuries. The Pillar was brought there by one of the Rajput princes who founded in the middle of the eleventh century the first city really known to history as Delhi. There Prithvi Raja reigned, who still lives in Indian minstrelsy as the embodiment of Hindu chivalry, equally gallant and daring in love and in war—the last to make a stand in northern India against the successive waves of Mahomedan conquest which Central Asia had begun to pour in upon India in 1001, with the first of Mahmud Ghazni's seventeen raids. In the next century an Afghan wave swept down on the top of the original Turki wave, and Kutub-ed-Din, having proclaimed himself Emperor of Delhi in 1206, built the great Mosque of Kuwwet-el-Islam, "The Power of Islam," and the lofty minaret, still known by his name, from which for six centuries the Moslem call to prayer went forth to proclaim Mahomedan domination over India....