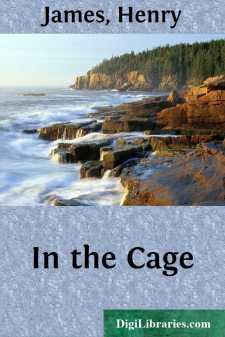 It had occurred to her early that in her position—that of a young person spending, in framed and wired confinement, the life of a guinea-pig or a magpie—she should know a great many persons without their recognising the acquaintance.  That made it an emotion the more lively—though singularly rare and always, even then, with opportunity still very much smothered—to see any one come in whom she knew outside, as she called it, any one who could add anything to the meanness of her function.  Her function was to sit there with two young men—the other telegraphist and the counter-clerk; to mind the “sounder,” which was always going, to dole out stamps and postal-orders, weigh letters, answer stupid questions, give difficult change and, more than anything else, count words as numberless as the sands of the sea, the words of the telegrams thrust, from morning to night, through the gap left in the high lattice, across the encumbered shelf that her forearm ached with rubbing.  This transparent screen fenced out or fenced in, according to the side of the narrow counter on which the human lot was cast, the duskiest corner of a shop pervaded not a little, in winter, by the poison of perpetual gas, and at all times by the presence of hams, cheese, dried fish, soap, varnish, paraffin and other solids and fluids that she came to know perfectly by their smells without consenting to know them by their names.

The barrier that divided the little post-and-telegraph-office from the grocery was a frail structure of wood and wire; but the social, the professional separation was a gulf that fortune, by a stroke quite remarkable, had spared her the necessity of contributing at all publicly to bridge.  When Mr. Cocker’s young men stepped over from behind the other counter to change a five-pound note—and Mr. Cocker’s situation, with the cream of the “Court Guide” and the dearest furnished apartments, Simpkin’s, Ladle’s, Thrupp’s, just round the corner, was so select that his place was quite pervaded by the crisp rustle of these emblems—she pushed out the sovereigns as if the applicant were no more to her than one of the momentary, the practically featureless, appearances in the great procession; and this perhaps all the more from the very fact of the connexion (only recognised outside indeed) to which she had lent herself with ridiculous inconsequence.  She recognised the others the less because she had at last so unreservedly, so irredeemably, recognised Mr. Mudge.  However that might be, she was a little ashamed of having to admit to herself that Mr. Mudge’s removal to a higher sphere—to a more commanding position, that is, though to a much lower neighbourhood—would have been described still better as a luxury than as the mere simplification, the corrected awkwardness, that she contented herself with calling it.  He had at any rate ceased to be all day long in her eyes, and this left something a little fresh for them to rest on of a Sunday.  During the three months of his happy survival at Cocker’s after her consent to their engagement she had often asked herself what it was marriage would be able to add to a familiarity that seemed already to have scraped the platter so clean.  Opposite there, behind the counter of which his superior stature, his whiter apron, his more clustering curls and more present, too present, h’s had been for a couple of years the principal ornament, he had moved to and fro before her as on the small sanded floor of their contracted future.  She was conscious now of the improvement of not having to take her present and her future at once.  They were about as much as she could manage when taken separate....