Ideas of Good and Evil 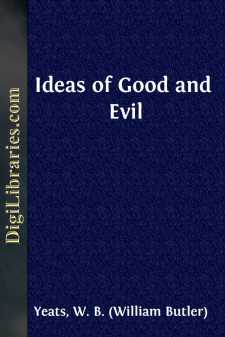 WHAT IS ‘POPULAR POETRY’?

I think it was a Young Ireland Society that set my mind running on ‘popular poetry.’ We used to discuss everything that was known to us about Ireland, and especially Irish literature and Irish history. We had no Gaelic, but paid great honour to the Irish poets who wrote in English, and quoted them in our speeches. I could have told you at that time the dates of the birth and death, and quoted the chief poems, of men whose names you have not heard, and perhaps of some whose names I have forgotten. I knew in my heart that the most of them wrote badly, and yet such romance clung about them, such a desire for Irish poetry was in all our minds, that I kept on saying, not only to others but to myself, that most of them wrote well, or all but well. I had read Shelley and Spenser and had tried to mix their styles together in a pastoral play which I have not come to dislike much, and yet I do not think Shelley or Spenser ever moved me as did these poets. I thought one day—I can remember the very day when I thought it—‘If somebody could make a style which would not be an English style and yet would be musical and full of colour, many others would catch fire from him, and we would have a really great school of ballad poetry in Ireland. If these poets, who have never ceased to fill the newspapers and the ballad-books with their verses, had a good tradition they would write beautifully and move everybody as they move me.’ Then a little later on I thought, ‘If they had something else to write about besides political opinions, if more of them would write about the beliefs of the people like Allingham, or about old legends like Ferguson, they would find it easier to get a style.’ Then, with a deliberateness that still surprises me, for in my heart of hearts I have never been quite certain that one should be more than an artist, that even patriotism is more than an impure desire in an artist, I set to work to find a style and things to write about that the ballad writers might be the better.

They are no better, I think, and my desire to make them so was, it may be, one of the illusions Nature holds before one, because she knows that the gifts she has to give are not worth troubling about. It is for her sake that we must stir ourselves, but we would not trouble to get out of bed in the morning, or to leave our chairs once we are in them, if she had not her conjuring bag. She wanted a few verses from me, and because it would not have seemed worth while taking so much trouble to see my books lie on a few drawing-room tables, she filled my head with thoughts of making a whole literature, and plucked me out of the Dublin art schools where I should have stayed drawing from the round, and sent me into a library to read bad translations from the Irish, and at last down into Connaught to sit by turf fires. I wanted to write ‘popular poetry’ like those Irish poets, for I believed that all good literatures were popular, and even cherished the fancy that the Adelphi melodrama, which I had never seen, might be good literature, and I hated what I called the coteries....