How to Form a Library, 2nd ed 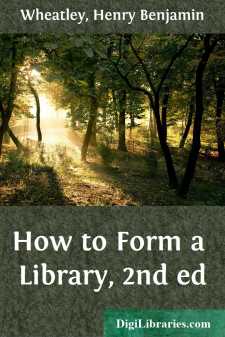 It will be generally allowed that a handy guide to the formation of libraries is required, but it may be that the difficulty of doing justice to so large a subject has prevented those who felt the want from attempting to fill it. I hope therefore that it will not be considered that I have shown temerity by stepping into the vacant place. I cannot hope to have done full justice to so important a theme in the small space at my disposal, but I think I can say that this little volume contains much information which the librarian and the book lover require and cannot easily obtain elsewhere. They are probably acquainted with most of this information, but the memory will fail us at times and it is then convenient to have a record at hand.

A book of this character is peculiarly open to criticism, but I hope the critics will give me credit for knowing more than I have set down. In making a list of books of reference, I have had to make a selection, and works have been before me that I have decided to omit, although some would think them as important as many of those I have included.

I need not extend this preface with any lengthy explanation of the objects of the book, as these are stated in the Introduction, but before concluding I may perhaps be allowed to allude to one personal circumstance. I had hoped to dedicate this first volume of the Book Lover's Library to Henry Bradshaw, one of the most original and most learned bibliographers that ever lived, but before it was finished the spirit of that great man had passed away to the inexpressible grief of all who knew him. It is with no desire to shield myself under the shelter of a great name, but with a reverent wish to express my own sense of our irreparable loss that I dedicate this book (though all unworthy of the honour) to his memory.

Although there can be little difference of opinion among book lovers as to the need of a Handbook which shall answer satisfactorily the question—"How to Form a Library"—it does not follow that there will be a like agreement as to the best shape in which to put the answer. On the one side a string of generalities can be of no use to any one, and on the other a too great particularity of instruction may be resented by those who only require hints on a few points, and feel that they know their own business better than any author can tell them.

One of the most important attempts to direct the would-be founder of a Library in his way was made as long ago as 1824 by Dr. Dibdin, and the result was entitled The Library Companion. The book could never have been a safe guide, and now it is hopelessly out of date. Tastes change, and many books upon the necessity of possessing which Dibdin enlarges are now little valued....