History of the Revolt of the Netherlands - Volume 04 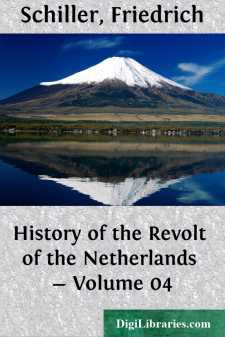 The two counts were a few weeks after their arrest conveyed to Ghent under an escort of three thousand Spaniards, where they were confined in the citadel for more than eight months. Their trial commenced in due form before the council of twelve, and the solicitor-general, John Du Bois, conducted the proceedings. The indictment against Egmont consisted of ninety counts, and that against Horn of sixty. It would occupy too much space to introduce them here. Every action, however innocent, every omission of duty, was interpreted on the principle which had been laid down in the opening of the indictment, "that the two counts, in conjunction with the Prince of Orange, had planned the overthrow of the royal authority in the Netherlands, and the usurpation of the government of the country;" the expulsion of Granvella; the embassy of Egmont to Madrid; the confederacy of the Gueux; the concessions which they made to the Protestants in the provinces under their government—all were made to have a connection with, and reference to, this deliberate design. Thus importance was attached to the most insignificant occurrences, and one action made to darken and discolor another. By taking care to treat each of the charges as in itself a treasonable offence it was the more easy to justify a sentence of high treason by the whole.

The accusations were sent to each of the prisoners, who were required to reply to them within five days. After doing so they were allowed to employ solicitors and advocates, who were permitted free access to them; but as they were accused of treason their friends were prohibited from visiting them. Count Egmont employed for his solicitor Von Landas, and made choice of a few eminent advocates from Brussels.

The first step was to demur against the tribunal which was to try them, since by the privilege of their order they, as Knights of the Golden Fleece, were amenable only to the king himself, the grand master. But this demurrer was overruled, and they were required to produce their witnesses, in default of which they were to be proceeded against /in contumaciam./ Egmont had satisfactorily answered to eighty-two counts, while Count Horn had refuted the charges against him, article by article. The accusation and the defence are still extant; on that defence every impartial tribunal would have acquitted them both. The Procurator Fiscal pressed for the production of their evidence, and the Duke of Alva issued his repeated commands to use despatch. They delayed, however, from week to week, while they renewed their protests against the illegality of the court. At last the duke assigned them nine days to produce their proofs; on the lapse of that period they were to be declared guilty, and as having forfeited all right of defence.

During the progress of the trial the relations and friends of the two counts were not idle. Egmont's wife, by birth a duchess of Bavaria, addressed petitions to the princes of the German empire, to the Emperor, and to the King of Spain. The Countess Horn, mother of the imprisoned count, who was connected by the ties of friendship or of blood with the principal royal families of Germany, did the same. All alike protested loudly against this illegal proceeding, and appealed to the liberty of the German empire, on which Horn, as a count of the empire, had special claims; the liberty of the Netherlands and the privileges of the Order of the Golden Fleece were likewise insisted upon. The Countess Egmont succeeded in obtaining the intercession of almost every German court in behalf of her husband. The King of Spain and his viceroy were besieged by applications in behalf of the accused, which were referred from one to the other, and made light of by both. Countess Horn collected certificates from all the Knights of the Golden Fleece in Spain, Germany, and Italy to prove the privileges of the order. Alva rejected them with a declaration that they had no force in such a case as the present. "The crimes of which the counts are accused relate to the affairs of the Belgian provinces, and he, the duke, was appointed by the king sole judge of all matters connected with those countries."

Four months had been allowed to the solicitor-general to draw up the indictment, and five were granted to the two counts to prepare for their defence. But instead of losing their time and trouble in adducing their evidence, which, perhaps, would have profited then but little, they preferred wasting it in protests against the judges, which availed them still less....