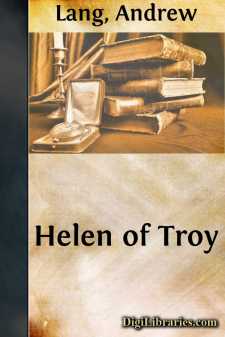 Of the coming of Paris to the house of Menelaus, King of Lacedaemon, and of the tale Paris told concerning his past life.

All day within the palace of the King   In Lacedaemon, was there revelry,Since Menelaus with the dawn did spring   Forth from his carven couch, and, climbing high   The tower of outlook, gazed along the dryWhite road that runs to Pylos through the plain,   And mark’d thin clouds of dust against the sky,And gleaming bronze, and robes of purple stain.

Then cried he to his serving men, and all   Obey’d him, and their labour did not spare,And women set out tables through the hall,   Light polish’d tables, with the linen fair.   And water from the well did others bear,And the good house-wife busily brought forth   Meats from her store, and stinted not the rareWine from Ismarian vineyards of the North.

The men drave up a heifer from the field   For sacrifice, and sheath’d her horns with gold;And strong Boethous the axe did wield   And smote her; on the fruitful earth she roll’d,   And they her limbs divided; fold on foldThey laid the fat, and cast upon the fire   The barley grain.  Such rites were wrought of oldWhen all was order’d as the Gods desire.

And now the chariots came beneath the trees   Hard by the palace portals, in the shade,And Menelaus knew King Diocles   Of Pherae, sprung of an unhappy maid   Whom the great Elian River God betray’dIn the still watches of a summer night,   When by his deep green water-course she stray’dAnd lean’d to pluck his water-lilies white.

Besides King Diocles there sat a man   Of all men mortal sure the fairest far,For o’er his purple robe Sidonian   His yellow hair shone brighter than the star   Of the long golden locks that bodeth war;His face was like the sunshine, and his blue   Glad eyes no sorrow had the spell to marWere clear as skies the storm hath thunder’d through.

Then Menelaus spake unto his folk,   And eager at his word they ran amain,And loosed the sweating horses from the yoke,   And cast before them spelt, and barley grain.   And lean’d the polish’d car, with golden rein,Against the shining spaces of the wall;   And called the sea-rovers who follow’d fainWithin the pillar’d fore-courts of the hall.

The stranger-prince was follow’d by a band   Of men, all clad like rovers of the sea,And brown’d were they as is the desert sand,   Loud in their mirth, and of their bearing free;   And gifts they bore, from the deep treasuryAnd forests of some far-off Eastern lord,   Vases of gold, and bronze, and ivory,That might the Pythian fane have over-stored.

Now when the King had greeted Diocles   And him that seem’d his guest, the twain were ledTo the dim polish’d baths, where, for their ease,   Cool water o’er their lustrous limbs was shed;   With oil anointed was each goodly headBy Asteris and Phylo fair of face;   Next, like two gods for loveliness, they spedTo Menelaus in the banquet-place....