Gardening Without Irrigation: or without much, anyway 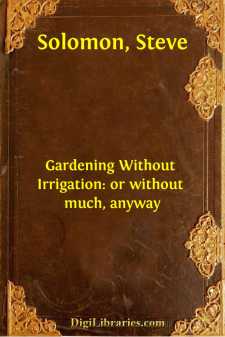 First, you should know why a maritime Northwest raised-bed gardener named Steve Solomon became worried about his dependence on irrigation.

I'm from Michigan. I moved to Lorane, Oregon, in April 1978 and homesteaded on 5 acres in what I thought at the time was a cool, showery green valley of liquid sunshine and rainbows. I intended to put in a big garden and grow as much of my own food as possible.

Two months later, in June, just as my garden began needing water, my so-called 15-gallon-per-minute well began to falter, yielding less and less with each passing week. By August it delivered about 3 gallons per minute. Fortunately, I wasn't faced with a completely dry well or one that had shrunk to below 1 gallon per minute, as I soon discovered many of my neighbors were cursed with. Three gallons per minute won't supply a fan nozzle or even a common impulse sprinkler, but I could still sustain my big raised-bed garden by watering all night, five or six nights a week, with a single, 2-1/2 gallon-per-minute sprinkler that I moved from place to place.

I had repeatedly read that gardening in raised beds was the most productive vegetable growing method, required the least work, and was the most water-efficient system ever known. So, without adequate irrigation, I would have concluded that food self-sufficiency on my homestead was not possible. In late September of that first year, I could still run that single sprinkler. What a relief not to have invested every last cent in land that couldn't feed us.

For many succeeding years at Lorane, I raised lots of organically grown food on densely planted raised beds, but the realities of being a country gardener continued to remind me of how tenuous my irrigation supply actually was. We country folks have to be self-reliant: I am my own sanitation department, I maintain my own 800-foot-long driveway, the septic system puts me in the sewage business. A long, long response time to my 911 call means I'm my own self-defense force. And I'm my own water department.

Without regular and heavy watering during high summer, dense stands of vegetables become stunted in a matter of days. Pump failure has brought my raised-bed garden close to that several times. Before my frantic efforts got the water flowing again, I could feel the stressed-out garden screaming like a hungry baby.

As I came to understand our climate, I began to wonder about complete food self-sufficiency. How did the early pioneers irrigate their vegetables? There probably aren't more than a thousand homestead sites in the entire maritime Northwest with gravity water. Hand pumping into hand-carried buckets is impractical and extremely tedious. Wind-powered pumps are expensive and have severe limits.

The combination of dependably rainless summers, the realities of self-sufficient living, and my homestead's poor well turned out to be an opportunity. For I continued wondering about gardens and water, and discovered a method for growing a lush, productive vegetable garden on deep soil with little or no irrigation, in a climate that reliably provides 8 to 12 virtually dry weeks every summer.

Being a garden writer, I was on the receiving end of quite a bit of local lore....