From a Cornish Window A New Edition 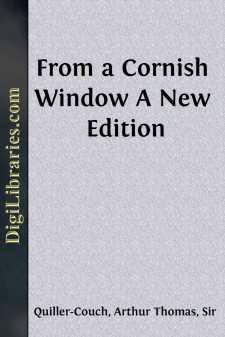 Severe and ruthlessly honest man that you are, you will find that the levities and the gravities of this book do not accord, and will say so.

I plead only that they were written at intervals, and in part for recreation, during years in which their author has striven to maintain a cheerful mind while a popular philosophy which he believed to be cheap took possession of men and translated itself into politics which he knew to be nasty. I may summarise it, in its own jargon, as the philosophy of the Superman, and succinctly describe it as an attempt to stretch a part of the Darwinian hypothesis and make it cover the whole of man's life and conduct. I need not remind you how fatally its doctrine has flattered, in our time and in our country, the worst instincts of the half-educated: but let us remove it from all spheres in which we are interested and contemplate it as expounded by an American Insurance 'Lobbyist,' a few days ago, before the Armstrong Committee:—

"The Insurance world to-day is the greatest financial proposition in the United States; and, as great affairs always do, it commands a higher law."

I have read precisely the same doctrine in a University Sermon preached by an Archbishop; but there its point was confused by pietistic rhetoric: the point being that in life, which is a struggle, success has in itself something divine, by virtue of which it can be to itself a law of right and wrong; and (inferentially) that a man is relieved of the noble obligation to command himself so soon and in so far as he is rich enough or strong enough to command other people.

But why (you will ask) do I drag this doctrine into a dedication? Because, my dear Archer, I have fought against it for close upon seventeen years; because seventeen years is no small slice of a man's life—rather, so long a time that it has taught me to prize my bruises and prefer that, if anybody hereafter care to know me, he shall know me as one whose spirit took its cheer in intervals of a fight against detestable things; that—let him rank me in talent never so low beside my contemporaries who preached this doctrine—he shall at least have no excuse but to acquit me of being one with them in mind or purpose; and lastly, because in these times few things have brought me such comfort (stern comfort!) as I have derived from your criticism, so hospitable to ideas, so inflexible in judging right from wrong. As I have lived lonelier it has been better for me, and a solace beyond your guessing, to have been reminded that criticism still lives amongst us and has a Roman spirit.

My old friend and publisher, Mr. Arrowsmith, maintains that the time has come for a cheap edition of this book. Should the public endorse that opinion, he will probably go about pretending that his head is as good as his heart.

From a Cornish Window first appeared between cloth covers some six or seven years ago. I see that its Dedication bears the date, April 3rd, 1906....