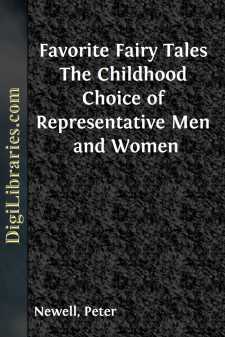 WHAT are the best fairy stories? Are they not those which have lived most vividly in active minds? The ripeness of after life works its changes; but we are not dealing with literary judgments—rather with the choice of childhood which fortunately lingers in memory, whatever store of wisdom may come in later years. There is here no question of the new or unusual. On the contrary, it is the ideas or visions handed down for generations or centuries and set in final form that remain with us as types of fancy or wisdom. Of these there are so many that a selection is essential. No one book can be a complete treasure-house of all the imagination, humor, and sentiment of the fairy tale. But it has been possible to obtain a representative judgment for this volume which we believe to be of peculiar worth.

This book gives us the favorite fairy tales of men and women who have gained eminence in American life. It is a book, therefore, based upon an original plan, which stands by itself. Any collection formed by one person must reflect personal preferences. It must have obvious limitations, however excellent—as in the case of Miss Mulock or Laboulaye—the choice of the single editor may be. But to a large extent such a collection as this represents that consensus of opinion which invests a given work with the rank of a classic. The desire of the publishers has been to determine the youthful preferences of those whose opinions carry weight and to present their selections among the wealth of fairy tales which the world cherishes from one generation to another. Such a thing as a collection of all good fairy tales would be unthinkably cumbersome. We need guidance and selection. For the expressions of personal choice afforded in the interests of this book, the publishers desire to offer their grateful acknowledgments.

It has happened naturally that more than one vote has been cast for the same story. For example, the president of Yale, in his selection of “Jack the Giant-killer,” had the companionship of the president of Columbia and of the editor of Harper’s Magazine, who are really represented, therefore, by a second choice. The three stories preferred by the chairman of the Wisconsin Free Library Commission had all been preferred by others.

But “Cinderella” is evidently quite the equal of “Jack the Giant-killer” in the affections of readers, and the choice of this well-loved tale has been accompanied by some charming letters from which it is impossible not to quote.

Thus the Hon. John Bigelow writes: “Perrault’s story of Cinderella made the deepest impression upon me. It is the only one from which I can now remember to have received a distinct and permanent ethical impression.”

“I am not really conscious of any special preference for one fairy story over another,” wrote Professor Lounsbury, “but as somebody, it seems to me, ought to stand up for sentiment, I am going to vote for ‘Cinderella.’ I hesitated a moment about ‘The Sleeping Beauty,’ but I leave that for one younger.”

In a letter rich in personal quality, the Hon....