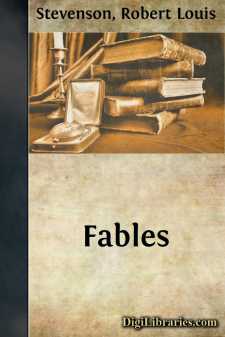 I.—THE PERSONS OF THE TALE.

After the 32nd chapter of Treasure Island, two of the puppets strolled out to have a pipe before business should begin again, and met in an open place not far from the story.

“Good-morning, Cap’n,” said the first, with a man-o’-war salute, and a beaming countenance.

“Now, Cap’n Smollett,” remonstrated Silver, “dooty is dooty, as I knows, and none better; but we’re off dooty now; and I can’t see no call to keep up the morality business.”

“You’re a damned rogue, my man,” said the Captain.

“Well, I don’t really exist either,” says the Captain, “which seems to meet that.”

“I wouldn’t set no limits to what a virtuous chara’ter might consider argument,” responded Silver.  “But I’m the villain of this tale, I am; and speaking as one sea-faring man to another, what I want to know is, what’s the odds?”

“Were you never taught your catechism?” said the Captain.  “Don’t you know there’s such a thing as an Author?”

“Such a thing as a Author?” returned John, derisively.  “And who better’n me?  And the p’int is, if the Author made you, he made Long John, and he made Hands, and Pew, and George Merry—not that George is up to much, for he’s little more’n a name; and he made Flint, what there is of him; and he made this here mutiny, you keep such a work about; and he had Tom Redruth shot; and—well, if that’s a Author, give me Pew!”

“Don’t you believe in a future state?” said Smollett.  “Do you think there’s nothing but the present story-paper?”

“I don’t rightly know for that,” said Silver; “and I don’t see what it’s got to do with it, anyway.  What I know is this: if there is sich a thing as a Author, I’m his favourite chara’ter.  He does me fathoms better’n he does you—fathoms, he does.  And he likes doing me.  He keeps me on deck mostly all the time, crutch and all; and he leaves you measling in the hold, where nobody can’t see you, nor wants to, and you may lay to that!  If there is a Author, by thunder, but he’s on my side, and you may lay to it!”

“I see he’s giving you a long rope,” said the Captain.  “But that can’t change a man’s convictions.  I know the Author respects me; I feel it in my bones; when you and I had that talk at the blockhouse door, who do you think he was for, my man?”

“And don’t he respect me?” cried Silver.  “Ah, you should ‘a’ heard me putting down my mutiny, George Merry and Morgan and that lot, no longer ago’n last chapter; you’d heard something then!  You’d ‘a’ seen what the Author thinks o’ me!  But come now, do you consider yourself a virtuous chara’ter clean through?”

“God forbid!” said Captain Smollett, solemnly.  “I am a man that tries to do his duty, and makes a mess of it as often as not.  I’m not a very popular man at home, Silver, I’m afraid!” and the Captain sighed....