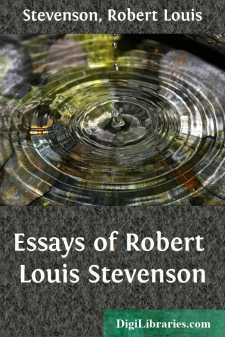 I LIFE OF STEVENSON

Robert Louis Stevenson[1] was born at Edinburgh on the 13 November 1850. His father, Thomas, and his grandfather, Robert, were both distinguished light-house engineers; and the maternal grandfather, Balfour, was a Professor of Moral Philosophy, who lived to be ninety years old. There was, therefore, a combination of Lux et Veritas in the blood of young Louis Stevenson, which in Dr. Jekyll and Mr. Hyde took the form of a luminous portrayal of a great moral idea.

In the language of Pope, Stevenson's life was a long disease. Even as a child, his weak lungs caused great anxiety to all the family except himself; but although Death loves a shining mark, it took over forty years of continuous practice for the grim archer to send the black arrow home. It is perhaps fortunate for English literature that his health was no better; for the boy craved an active life, and would doubtless have become an engineer. He made a brave attempt to pursue this calling, but it was soon evident that his constitution made it impossible. After desultory schooling, and an immense amount of general reading, he entered the University of Edinburgh, and then tried the study of law. Although the thought of this profession became more and more repugnant, and finally intolerable, he passed his final examinations satisfactorily. This was in 1875.

He had already begun a series of excursions to the south of France and other places, in search of a climate more favorable to his incipient malady; and every return to Edinburgh proved more and more conclusively that he could not live in Scotch mists. He had made the acquaintance of a number of literary men, and he was consumed with a burning ambition to become a writer. Like Ibsen's Master-Builder, there was a troll in his blood, which drew him away to the continent on inland voyages with a canoe and lonely tramps with a donkey; these gave him material for books full of brilliant pictures, shrewd observations, and irrepressible humour. He contributed various articles to magazines, which were immediately recognised by critics like Leslie Stephen as bearing the unmistakable mark of literary genius; but they attracted almost no attention from the general reading public, and their author had only the consciousness of good work for his reward. In 1880 he was married.

Stevenson's first successful work was Treasure Island, which was published in book form in 1883, and has already become a classic. This did not, however, bring him either a good income or general fame. His great reputation dates from the publication of the Strange Case of Dr. Jekyll and Mr. Hyde, which appeared in 1886. That work had an instant and unqualified success, especially in America, and made its author's name known to the whole English-speaking world. Kidnapped was published the same year, and another masterpiece, The Master of Ballantrae, in 1889.

After various experiments with different climates, including that of Switzerland, Stevenson sailed for America in August 1887....