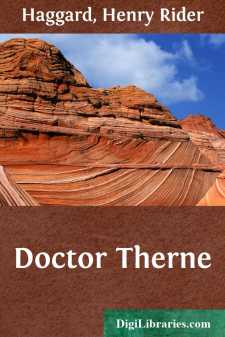 CHAPTER I THE DILIGENCE

James Therne is not my real name, for why should I publish it to the world? A year or two ago it was famous—or infamous—enough, but in that time many things have happened. There has been a war, a continental revolution, two scandals of world-wide celebrity, one moral and the other financial, and, to come to events that interest me particularly as a doctor, an epidemic of Asiatic plague in Italy and France, and, stranger still, an outbreak of the mediaeval grain sickness, which is believed to have carried off 20,000 people in Russia and German Poland, consequent, I have no doubt, upon the wet season and poor rye harvest in those countries.

These occurrences and others are more than enough to turn the public mind from the recollection of the appalling smallpox epidemic that passed over England last autumn two years, of which the first fury broke upon the city of Dunchester, my native place, that for many years I had the honour to represent in Parliament. The population of Dunchester, it is true, is smaller by over five thousand souls, and many of those who survive are not so good-looking as they were, but the gap is easily filled and pock-marks are not hereditary. Also, such a horror will never happen again, for now the law of compulsory vaccination is strong enough! Only the dead have cause of complaint, those who were cut off from the world and despatched hot-foot whither we see not. Myself I am certain of nothing; I know too much about the brain and body to have much faith in the soul, and I pray to God that I may be right. Ah! there it comes in. If a God, why not the rest, and who shall say there is no God? Somehow it seems to me that more than once in my life I have seen His Finger.

Yet I pray that I am right, for if I am wrong what a welcome awaits me yonder when grief and chloral and that "slight weakness of the heart" have done their work.

Yes—five thousand of them or more in Dunchester alone, and, making every allowance, I suppose that in this one city there were very many of these—young people mostly—who owed their deaths to me, since it was my persuasion, my eloquent arguments, working upon the minds of their prejudiced and credulous elders, that surely, if indirectly, brought their doom upon them. "A doctor is not infallible, he may make mistakes." Quite so, and if a mistake of his should kill a few thousands, why, that is the act of God (or of Fate) working through his blindness. But if it does not happen to have been a mistake, if, for instance, all those dead, should they still live in any place or shape, could say to me, "James Therne, you are the murderer of our bodies, since, for your own ends, you taught us that which you knew not to be the truth."

How then? I ask. So—let them say it if they will. Let all that great cloud of witnesses compass me about, lads and maidens, children and infants, whose bones cumber the churchyards yonder in Dunchester. I defy them, for it is done and cannot be undone. Yet, in their company are two whose eyes I dread to meet: Jane, my daughter, whose life was sacrificed through me, and Ernest Merchison, her lover, who went to seek her in the tomb....