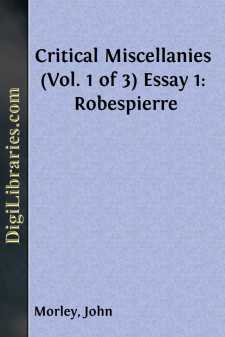 A French writer has recently published a careful and interesting volume on the famous events which ended in the overthrow of Robespierre and the close of the Reign of Terror. These events are known in the historic calendar as the Revolution of Thermidor in the Year II. After the fall of the monarchy, the Convention decided that the year should begin with the autumnal equinox, and that the enumeration should date from the birth of the Republic. The Year I. opens on September 22, 1792; the Year II. opens on the same day of 1793. The month of Thermidor begins on July 19. The memorable Ninth Thermidor therefore corresponds to July 27, 1794. This has commonly been taken as the date of the commencement of a counter-revolution, and in one sense it was so. Comte, however, and others have preferred to fix the reaction at the execution of Danton (April 5, 1794), or Robespierre's official proclamation of Deism in the Festival of the Supreme Being (May 7, 1794).

M. D'Héricault does not belong to the school of writers who treat the course of history as a great high road, following a firmly traced line, and set with plain and ineffaceable landmarks. The French Revolution has nearly always been handled in this way, alike by those who think it fruitful in blessings, and by their adversaries, who pronounce it a curse inflicted by the wrath of Heaven. Historians have looked at the Revolution as a plain landsman looks at the sea. To the landsman the ocean seems one huge immeasurable flood, obeying a simple law of ebb and flow, and offering to the navigator a single uniform force. Yet in truth we know that the oceanic movement is the product of many forces; the seeming uniformity covers the energy of a hundred currents and counter-currents; the sea-floor is not even nor the same, but is subject to untold conditions of elevation and subsidence; the sea is not one mass, but many masses moving along definite lines of their own. It is the same with the great tides of history. Wise men shrink from summing them up in single propositions. That the French Revolution led to an immense augmentation of happiness, both for the French and for mankind, can only be denied by the Pope. That it secured its beneficent results untempered by any mixture of evil, can only be maintained by men as mad as Doctor Pangloss. The Greek poetess Corinna said to the youthful Pindar, when he had interwoven all the gods and goddesses in the Theban mythology into a single hymn, that we should sow with the hand and not with the sack. Corinna's monition to the singer is proper to the interpreter of historical truth: he should cull with the hand, and not sweep in with the scythe. It is doubtless mere pedantry to abstain from the widest conception of the sum of a great movement. A clear, definite, and stable idea of the meaning in the history of human progress of such vast groups of events as the Reformation or the Revolution, is indispensable for any one to whom history is a serious study of society. It is just as important, however, not to forget that they were really groups of events, and not in either case a single uniform movement. The World-Epos is after all only a file of the morning paper in a state of glorification. A sensible man learns, in everyday life, to abstain from praising and blaming character by wholesale; he becomes content to say of this trait that it is good, and of that act that it was bad. So in history, we become unwilling to join or to admire those who insist upon transferring their sentiment upon the whole to their judgment upon each part. We seek to be allowed to retain a decided opinion as to the final value to mankind of a long series of transactions, and yet not to commit ourselves to set the same estimate on each transaction in particular, still less on each person associated with it. Why shall we not prize the general results of the Reformation, without being obliged to defend John of Leyden and the Munster Anabaptists...?