Calamities and Quarrels of Authors 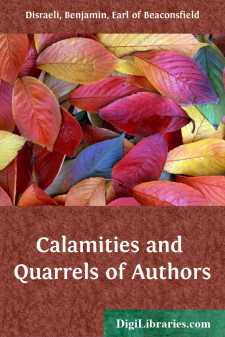 The Calamities of Authors have often excited the attention of the lovers of literature; and, from the revival of letters to this day, this class of the community, the most ingenious and the most enlightened, have, in all the nations of Europe, been the most honoured, and the least remunerated. Pierius Valerianus, an attendant in the literary court of Leo X., who twice refused a bishopric that he might pursue his studies uninterrupted, was a friend of Authors, and composed a small work, “De Infelicitate Literatorum,” which has been frequently reprinted. It forms a catalogue of several Italian literati, his contemporaries; a meagre performance, in which the author shows sometimes a predilection for the marvellous, which happens so rarely in human affairs; and he is so unphilosophical, that he places among the misfortunes of literary men those fatal casualties to which all men are alike liable. Yet even this small volume has its value: for although the historian confines his narrative to his own times, he includes a sufficient number of names to convince us that to devote our life to authorship is not the true means of improving our happiness or our fortune.

At a later period, a congenial work was composed by Theophilus Spizelius, a German divine; his four volumes are after the fashion of his country and his times, which could make even small things ponderous. In 1680 he first published two volumes, entitled “Infelix Literatus,” and five years afterwards his “Felicissimus Literatus;” he writes without size, and sermonises without end, and seems to have been so grave a lover of symmetry, that he shapes his Felicities just with the same measure as his Infelicities. These two equalised bundles of hay might have held in suspense the casuistical ass of Sterne, till he had died from want of a motive to choose either. Yet Spizelius is not to be contemned because he is verbose and heavy; he has reflected more deeply than Valerianus, by opening the moral causes of those calamities which he describes.

The chief object of the present work is to ascertain some doubtful yet important points concerning Authors. The title of Author still retains its seduction among our youth, and is consecrated by ages. Yet what affectionate parent would consent to see his son devote himself to his pen as a profession? The studies of a true Author insulate him in society, exacting daily labours; yet he will receive but little encouragement, and less remuneration. It will be found that the most successful Author can obtain no equivalent for the labours of his life. I have endeavoured to ascertain this fact, to develope the causes and to paint the variety of evils that naturally result from the disappointments of genius. Authors themselves never discover this melancholy truth till they have yielded to an impulse, and adopted a profession, too late in life to resist the one, or abandon the other. Whoever labours without hope, a painful state to which Authors are at length reduced, may surely be placed among the most injured class in the community. Most Authors close their lives in apathy or despair, and too many live by means which few of them would not blush to describe.

Besides this perpetual struggle with penury, there are also moral causes which influence the literary character. I have drawn the individual characters and feelings of Authors from their own confessions, or deduced them from the prevalent events of their lives; and often discovered them in their secret history, as it floats on tradition, or lies concealed in authentic and original documents. I would paint what has not been unhappily called the psychological character.

I have limited my inquiries to our own country, and generally to recent times; for researches more curious, and eras more distant, would less forcibly act on our sympathy. If, in attempting to avoid the naked brevity of Valerianus, I have taken a more comprehensive view of several of our Authors, it has been with the hope that I was throwing a new light on their characters, or contributing some fresh materials to our literary history. I feel anxious for the fate of the opinions and the feelings which have arisen in the progress and diversity of this work; but whatever their errors may be, it is to them that my readers at least owe the materials of which it is formed; these materials will be received with consideration, as the confessions and statements of genius itself....