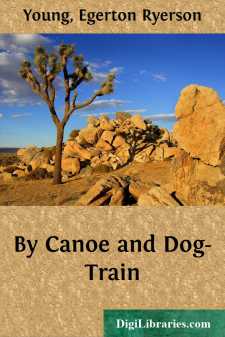 Several letters were handed into my study, where I sat at work among my books.

I was then pastor of a Church in the city of Hamilton. Showers of blessing had been descending upon us, and over a hundred and forty new members had but recently been received into the Church. I had availed myself of the Christmas holidays by getting married, and now was back again with my beloved, when these letters were handed in. With only one of them have we at present anything to do. As near as I can remember, it read as follows:—

“Dear Brother,—At a large and influential meeting of the Missionary Committee, held yesterday, it was unanimously decided to ask you to go as a missionary to the Indian tribes at Norway House, and in the North-West Territories north of Lake Winnipeg. An early answer signifying your acceptance of this will much oblige,

I read the letter, and then handed it, without comment, across the table to Mrs Young—the bride of but a few days—for her perusal. She read it over carefully, and then, after a quiet moment, as was quite natural, asked, “What does this mean?”

“I can hardly tell,” I replied; “but it is evident that it means a good deal.”

“Have you volunteered to go as a missionary to that far-off land?” she asked.

“Why, no. Much as I love, and deeply interested as I have ever been in the missionary work of our Church, I have not made the first move in this direction. Years ago I used to think I would love to go to a foreign field, but lately, as the Lord has been so blessing us here in the home work, and has given us such a glorious revival, I should have thought it like running away from duty to have volunteered for any other field.”

“Well, here is this letter; what are you going to do about it?”

“That is just what I would like to know,” was my answer.

“There is one thing we can do,” she said quietly; and we bowed ourselves in prayer, and “spread the letter before the Lord,” and asked for wisdom to guide us aright in this important matter which had so suddenly come upon us, and which, if carried out, would completely change all the plans and purposes which we, the young married couple, in all the joyousness of our honeymoon, had just been marking out. We earnestly prayed for Divine light and guidance to be so clearly revealed that we could not be mistaken as to our duty.

As we arose from our knees, I quietly said to Mrs Young, “Have you any impression on your mind as to our duty in this matter?”

Her eyes were suffused in tears, but the voice, though low, was firm, as she replied, “The call has come very unexpectedly, but I think it is from God, and we will go.”

My Church and its kind officials strongly opposed my leaving them, especially at such a time as this, when, they said, so many new converts, through my instrumentality, had been brought into the Church.

I consulted my beloved ministerial brethren in the city, and with but one exception the reply was, “Remain at your present station, where God has so abundantly blessed your labours.” The answer of the one brother who did not join in with the others has never been forgotten....