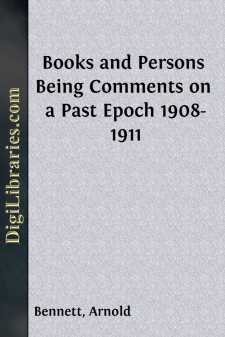 An important book on an important town is to be issued by Messrs. Methuen. The town is London, and the author Mr. Wilfred Whitten, known to journalism as John o' London. Considering that he comes from Newcastle-on-Tyne (or thereabouts), his pseudonym seems to stretch a point. However, Mr. Whitten is now acknowledged as one of the foremost experts in London topography. He is not an archæologist, he is a humanist—in a good dry sense; not the University sense, nor the silly sense. The word "human" is a dangerous word; I am rather inclined to handle it with antiseptic precautions. When a critic who has risen high enough to be allowed to sign his reviews in a daily paper calls a new book "a great human novel," you may be absolutely sure that the said novel consists chiefly of ridiculous twaddle. Mr. Whitten is not a humanist in that sense. He has no sentimentality, and a very great deal of both wit and humour.

He is also a critic admirably sane. Not long ago he gave a highly diverting exhibition of sanity in a short, shattering pronouncement upon the works of Mr. Arthur Christopher Benson and the school which has acquired celebrity by holding the mirror up to its own nature. The wonder was that Mr. Benson did not, following his precedent, write to the papers to say that Mr. Whitten was no gentleman. In the days before the Academy blended the characteristics of a comic paper with those of a journal of dogmatic theology, before it took to disowning its own reviewers, Mr. Whitten was the solid foundation of that paper's staff. He furnished the substance, which was embroidered by the dark grace of the personality of Mr. Lewis Hind, whose new volume of divagations is, by the way, just out.

But my main object in referring to Mr. Whitten is to state formally, and with a due sense of responsibility, that he is one of the finest prose writers now writing in English. His name is on the title-pages of several books, but no book of his will yet bear out my statement. The proof of it lies in weekly papers. No living Englishman can do "the grand manner"—combining majestic dignity with a genuine lyrical inspiration—better than Mr. Whitten. These are proud words of mine, but I am not going to disguise my conviction that I know what I am talking about. Some day some publisher will wake up out of the coma in which publishers exist, and publish in volume form—probably with coloured pictures as jam for children—Mr. Whitten's descriptions of English towns. Then I shall be justified. I might have waited till that august moment. But I want to be beforehand with Dr. Robertson Nicoll. I see that Dr. Nicoll has just added to his list of patents by inventing Leonard Merrick, whom I used to admire in print long before Dr. Nicoll had ever heard that Mr. J.M. Barrie regarded Leonard Merrick as the foremost English novelist. Dr. Nicoll has already got Mr. Whitten on to the reviewing staff of the Bookman. But I am determined that he shall not invent Mr. Whitten's prose style. I am the inventor of that.

A few weeks ago I claimed to be the discoverer of Mr. Wilfred Whitten as a first-class prose writer. I relinquish the claim, with apologies. Messrs. Methuen have staggered me by sending me Mrs. Laurence Binyon's "Nineteenth Century Prose," in which anthology is an example of Mr. Whitten's prose. Though staggered, I was delighted. I should very much like to know how Mrs. Binyon encountered the prose of Mr. Whitten. Did she hunt through the files of newspapers for what she might find therein, and was she thus rewarded? Or did some tremendous and omniscient expert give her the tip? I disagree with about 85 per cent. of the obiter dicta of her preface, but her anthology is certainly a most agreeable compilation. It shows, like sundry other recent anthologies, the strong liberating influence of Mr. E.V. Lucas, whose "Open Road" really amounted to a renascence of the craft.

And here is the tail-end of the extract which Mrs. Binyon has perfectly chosen from the essays of Mr. Whitten:

"...The moon pushing her way upwards through the vapours, and the scent of the beans and kitchen stuff from the allotments, and the gleaming rails below, spoke of the resumption of daily burdens....