Bluff Crag, or, A Good Word Costs Nothing 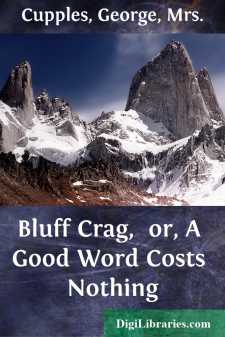 his is such a capital night for a story, papa," said Robert Lincoln to his father, who had laid away his newspaper and seemed inclined to take an extra forty winks.

"Indeed, Robert," said Mr. Lincoln, smiling, "I wonder if you would ever tire of hearing stories. I don't think I have one left; you and Lily have managed to exhaust my store."

"O papa, please don't say that," cried Lily, who was putting away her school-books on their proper shelf at the end of the room. "I am sure, if you shut your eyes and think very hard for a few minutes, you will be sure to find one."

"Very well, then, I shall try," said Mr. Lincoln; "perhaps there may be one among the cobwebs in my brain." Covering his face over with his newspaper, Mr. Lincoln lay back in his chair, and the children, drawing their stools closer to the fire, waited in patience to see the result of his meditation. It soon became evident, however, by his breathing, which became louder and longer, that Mr. Lincoln was falling asleep, and when at last he gave a loud snore, Robert could stand it no longer, and springing up, pulled the newspaper away, exclaiming,—

"O papa, you were actually going to sleep! You'll never find the story if you do!"

"I think, after all, I must have dropped over," said Mr. Lincoln, rubbing his eyes; "but you are wrong in thinking I couldn't find a story in my sleep, for I was just in the middle of such a nice one, when you wakened me, and, lo and behold, I found it was a dream."

"Oh, do tell us what you dreamed, papa," said Lily. "Your dreams are so funny sometimes. I think I like them better than the real stories."

"But it was only a bit of a dream. Bob there in his impatience knocked off the end, and I think it was going to be a very entertaining one."

"I'll tell you how you can manage, papa," said Lily earnestly, "you can make an end to it as you go along: you do tell us such nice stories out of your head."

Mrs. Lincoln having come into the room with the two younger children, a chair was placed for her and baby beside Mr. Lincoln. Little Dick trotted off to Robert's knee, and the dog, Charley, hearing that a story was going to be told, laid himself down on the rug before the fire, at Lily's feet.

"It's a very strange story, mamma," said Robert. "Papa fell asleep for two or three minutes, and dreamed the beginning of it. I am so sorry I wakened him; but he gave such a loud snore, I never thought he could be dreaming when he did that."

"Ah, but you are wrong there," said Mr. Lincoln, laughing; "you will hear the reason of the snore very soon. Well, then, to begin—but how can I begin? Lily likes stories to set out with 'Once upon a time;' and you, Master Bob, like me to mention the hero's name, and tell you how old he is, and describe him particularly. Now, in this case, I can do neither."

"You will require to say, Once upon a time, when I was taking 'forty winks,'" said Mrs. Lincoln, laughing. "I cannot see how you are to relate this strange story without a beginning."

"Neither can I," said Mr. Lincoln. "You know everything depends upon a good beginning. Therefore I think I had better go to sleep again, and perhaps I shall dream one."

"Oh, please, papa, don't; I am sure the one mamma suggested is first-rate," said Robert impatiently....