Alroy The Prince Of The Captivity 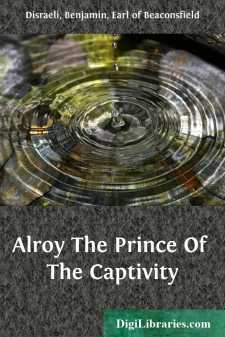 CHAPTER I. A Great Day for Israel.

THE cornets sounded a final flourish as the Prince of the Captivity dismounted from his white mule; his train shouted as if they were once more a people; and, had it not been for the contemptuous leer which played upon the countenances of the Moslem bystanders, it might have been taken for a day of triumph rather than of tribute.

'The glory has not departed!' exclaimed the venerable Bostenay, as he entered the hall of his mansion. 'It is not as the visit of Sheba unto Solomon; nevertheless the glory has not yet departed. You have done well, faithful Caleb.' The old man's courage waxed more vigorous, as each step within his own walls the more assured him against the recent causes of his fear, the audible curses and the threatened missiles of the unbelieving mob.

'It shall be a day of rejoicing and thanksgiving!' continued the Prince; 'and look, my faithful Caleb, that the trumpeters be well served. That last flourish was bravely done. It was not as the blast before Jericho; nevertheless, it told that the Lord of Hosts was for us. How the accursed Ishmaelites started! Did you mark, Caleb, that tall Turk in green upon my left? By the sceptre of Jacob, he turned pale! Oh! it shall be a day of rejoicing and thanksgiving! And spare not the wine, nor the flesh-pots for the people. Look you to this, my child, for the people shouted bravely and with a stout voice. It was not as the great shout in the camp when the ark returned; nevertheless, it was boldly done, and showed that the glory had not yet departed. So spare not the wine, my son, and drink to the desolation of Ishmael in the juice which he dare not quaff.'

'It has indeed been a great day for Israel!' exclaimed Caleb, echoing his master's exultation.

'Had the procession been forbidden,' continued Bostenay, 'had it been reserved for me of all the princes to have dragged the accursed tribute upon foot, without trumpets and without guards, by this sceptre, my good Caleb, I really think that, sluggishly as this old blood now runs, I would—— But it is needless now to talk; the God of our fathers hath been our refuge.'

'Verily, my lord, we were as David in the wilderness of Ziph; but now we are as the Lord's anointed in the stronghold of Engedi!'

'The glory truly has not yet utterly departed,' resumed the Prince in a more subdued tone; 'yet if—— I tell you what, Caleb; praise the Lord that you are young.'

'My Prince too may yet live to see the good day.'

'Nay, my child, you misinterpret me. Your Prince has lived to see the evil day. 'Twas not of the coming that I thought when I bid you praise the Lord because you were young, the more my sin. I was thinking, Caleb, that if your hair was as mine, if you could recollect, like me, the days that are gone by, the days when it needed no bride to prove we were princes,«the glorious days when we led captivity captive; I was thinking, I say, my son, what a gainful heritage it is to be born after the joys that have passed away.'