by Howard B. (Howard Benjamin) Grose 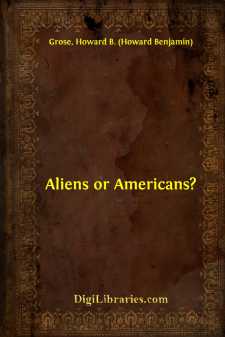 UNGUARDED GATES Wide open and unguarded stand our gates, And through them presses a wild, motley throng— Men from the Volga and the Tartar steppes, Featureless figures of the Hoang-Ho, Malayan, Scythian, Teuton, Celt, and Slav, Flying the old world's poverty and scorn; These bringing with them unknown gods and rites, Those, tiger passions, here to stretch their claws. In street and alley what strange tongues are these, Accents of menace alien to our air, Voices that once the Tower of Babel knew!   O Liberty, White Goddess! is it well To leave the gates unguarded? On thy breast Fold Sorrow's children, soothe the hurts of fate, Lift the downtrodden, but with the hand of steel Stay those who to thy sacred portals come To waste the gifts of freedom. Have a care Lest from thy brow the clustered stars be torn And trampled in the dust. For so of old The thronging Goth and Vandal trampled Rome. And where the temples of the Cæsars stood The lean wolf unmolested made her lair.

TO ONEWHO CHERISHES AMERICANIDEALS, WHO HAS INCULCATED LOVE OFCOUNTRY IN HER CHILDREN, ANDSOUGHT TO INSPIRE IT INALL—MY WIFE CONTENTS   Preface   Introduction, by Josiah Strong I. The Alien Advance II. Alien Admission and Restriction III. Problems of Legislation and Distribution IV. The New Immigration V. The Eastern Invasion VI. The Foreign Peril of the City VII. Immigration and the National Character VIII. The Home Mission Opportunity   APPENDIXES A. Tables of Immigrants Admitted and Debarred B. The Immigration Laws C. Work of Leading Denominations for the Foreign Population D. Bibliography     INDEX ILLUSTRATIONS Coming Americans The Inflowing Tide Ellis Island Immigration Station Receiving Room at Ellis Island Detained for Special Examination An Appeal from the Special Inquiry Board to Commissioner Watchorn The Landing at the Battery in New York A German Family Italian and Swiss Girls A Group of Twelve Different Nationalities Three Types of Immigrants A Group of Immigrants Just Arrived at Ellis Island An Italian Family Crowded in a New York Tenement Four Nationalities Portuguese and Spanish Children An Italian Sunday School in New England   Sketch Maps and Charts   Immigration at the Port of New York for 1906 Immigrant Distribution by States for 1905 Immigrant Distribution by Races: Scandinavian Canadian and British Irish Germanic French and Iberic Slavic Changes in Sources of Immigration Causing Increase of Illiteracy Countries from which the Slavs Come Distribution of Slavs in the United States Wave of Immigration for Eighty-seven Years Colored Chart of Races of Immigrants for 1905 PREFACE

It is not a question as to whether the aliens will come. They have come, millions of them; they are now coming, at the rate of a million a year. They come from every clime, country, and condition; and they are of every sort: good, bad, and indifferent, literate and illiterate, virtuous and vicious, ambitious and aimless, strong and weak, skilled and unskilled, married and single, old and young, Christian and infidel, Jew and pagan....