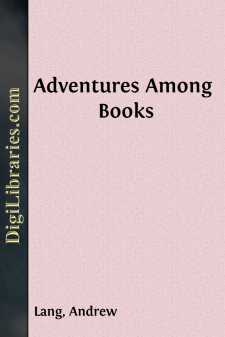 CHAPTER I: ADVENTURES AMONG BOOKS I

In an age of reminiscences, is there room for the confessions of a veteran, who remembers a great deal about books and very little about people?  I have often wondered that a Biographia Literaria has so seldom been attempted—a biography or autobiography of a man in his relations with other minds.  Coleridge, to be sure, gave this name to a work of his, but he wandered from his apparent purpose into a world of alien disquisitions.  The following pages are frankly bookish, and to the bookish only do they appeal.  The habit of reading has been praised as a virtue, and has been denounced as a vice.  In no case, if we except the perpetual study of newspapers (which cannot fairly be called reading), is the vice, or the virtue, common.  It is more innocent than opium-eating, though, like opium-eating, it unlocks to us artificial paradises.  I try to say what I have found in books, what distractions from the world, what teaching (not much), and what consolations.

In beginning an autobiographia literaria, an account of how, and in what order, books have appealed to a mind, which books have ever above all things delighted, the author must pray to be pardoned for the sin of egotism.  There is no other mind, naturally, of which the author knows so much as of his own.  On n’a que soi, as the poor girl says in one of M. Paul Bourget’s novels.  In literature, as in love, one can only speak for himself.  This author did not, like Fulke Greville, retire into the convent of literature from the strife of the world, rather he was born to be, from the first, a dweller in the cloister of a library.  Among the poems which I remember best out of early boyhood is Lucy Ashton’s song, in the “Bride of Lammermoor”:—

“Look not thou on beauty’s charming,Sit thou still when kings are arming,Taste not when the wine-cup glistens,Speak not when the people listens,Stop thine ear against the singer,From the red gold keep thy finger,Vacant heart, and hand, and eye,Easy live and quiet die.”

The rhymes, unlearned, clung to my memory; they would sing themselves to me on the way to school, or cricket-field, and, about the age of ten, probably without quite understanding them, I had chosen them for a kind of motto in life, a tune to murmur along the fallentis semita vitæ.  This seems a queer idea for a small boy, but it must be confessed.

“It takes all sorts to make a world,” some are soldiers from the cradle, some merchants, some orators; nothing but a love of books was the gift given to me by the fairies.  It was probably derived from forebears on both sides of my family, one a great reader, the other a considerable collector of books which remained with us and were all tried, persevered with, or abandoned in turn, by a student who has not blanched before the Epigoniad.

About the age of four I learned to read by a simple process.  I had heard the elegy of Cock Robin till I knew it by rote, and I picked out the letters and words which compose that classic till I could read it for myself.  Earlier than that, “Robinson Crusoe” had been read aloud to me, in an abbreviated form, no doubt.  I remember the pictures of Robinson finding the footstep in the sand, and a dance of cannibals, and the parrot.  But, somehow, I have never read “Robinson” since: it is a pleasure to come....