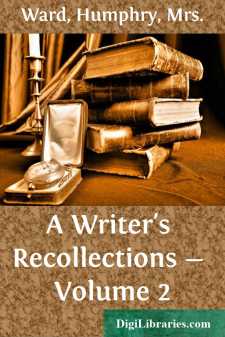 CHAPTER I LONDON IN THE 'EIGHTIES

The few recollections of William Forster that I have put together in the preceding volume lead naturally, perhaps, to some account of my friendship and working relations at this time with Forster's most formidable critic in the political press—Mr. John Morley, now Lord Morley. It was in the late 'seventies, I think, that I first saw Mr. Morley. I sat next him at the Master's dinner-table, and the impression he made upon me was immediate and lasting. I trust that a great man, to whom I owed much, will forgive me for dwelling on some of the incidents of literary comradeship which followed!

My husband and I, on the way home, compared notes. We felt that we had just been in contact with a singular personal power combined with a moral atmosphere which had in it both the bracing and the charm that, physically, are the gift of the heights. The "austere" Radical, indeed, was there. With regard to certain vices and corruptions of our life and politics, my uncle might as well have used Mr. Morley's name as that of Mr. Frederick Harrison, when he presented us, in "Friendship's Garland," with Mr. Harrison setting up a guillotine in his back garden. There was something—there always has been something—of the somber intensity of the prophet in Mr. Morley. Burke drew, as we all remember, an ineffaceable picture of Marie Antoinette's young beauty as he saw it in 1774, contrasting it with the "abominable scenes" amid which she perished. Mr. Morley's comment is:

But did not the protracted agonies of a nation deserve the tribute of a tear? As Paine asked, were men to weep over the plumage and forget the dying bird? … It was no idle abstraction, no metaphysical right of man for which the French cried, but only the practical right of being permitted, by their own toil, to save themselves and the little ones about their knees from hunger and cruel death.

The cry of the poor, indeed, against the rich and tyrannous, the cry of the persecuted Liberal, whether in politics or religion, against his oppressors—it used to seem to me, in the 'eighties, when, to my pleasure and profit, I was often associated with Mr. Morley, that in his passionate response to this double appeal lay the driving impulse of his life and the secret of his power over others. While we were still at Oxford he had brought out most of his books: On Compromise—the fierce and famous manifesto of 1874—and the well-known volumes on the Encyclopedists, Voltaire, Rousseau, Diderot. It was not for nothing that he had been a member of Pattison's college; and a follower of John Stuart Mill. The will to look the grimmest facts of life and destiny in the face, without flinching, and the resolve to accept no "anodyne" from religion or philosophy, combined with a ceaseless interest in the human fate and the human story, and a natural, inbred sympathy for the many against the few, for the unfortunate against the prosperous; it was these ardors and the burning sincerity with which he felt them, that made him so great a power among us, his juniors by half a generation....