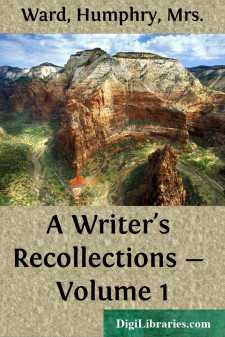 Do we all become garrulous and confidential as we approach the gates of old age? Is it that we instinctively feel, and cannot help asserting, our one advantage over the younger generation, which has so many over us?—the one advantage of time!

After all, it is not disputable that we have lived longer than they. When they talk of past poets, or politicians, or novelists, whom the young still deign to remember, of whom for once their estimate agrees with ours, we can sometimes put in a quiet, "I saw him"—or, "I talked with him"—which for the moment wins the conversational race. And as we elders fall back before the brilliance and glitter of the New Age, advancing "like an army with banners," this mere prerogative of years becomes in itself a precious possession. After all, we cannot divest ourselves of it, if we would. It is better to make friends with it—to turn it into a kind of panache—to wear it with an air, since wear it we must.

So as the years draw on toward the Biblical limit, the inclination to look back, and to tell some sort of story of what one has seen, grows upon most of us. I cannot hope that what I have to say will be very interesting to many. A life spent largely among books, and in the exercise of a literary profession, has very obvious drawbacks, as a subject-matter, when one comes to write about it. I can only attempt it with any success, if my readers will allow me a large psychological element. The thoughts and opinions of one human being, if they are sincere, must always have an interest for some other human beings. The world is there to think about; and if we have lived, or are living, with any sort of energy, we must have thought about it, and about ourselves in relation to it—thought "furiously" often. And it is out of the many "thinkings" of many folk, strong or weak, dull or far-ranging, that thought itself grows. For progress surely, whether in men or nations, means only a richer knowledge; the more impressions, therefore, on the human intelligence that we can seize and record, the more sensitive becomes that intelligence itself.

But of course the difficulty lies in the seizing and recording—in the choice, that is, of what to say, and how to say it. In this choice, as I look back over more than half a century, I can only follow—and trust—the same sort of instinct that one follows in the art of fiction. I shall be telling what is primarily true, or as true as I can make it, as distinguished from what is primarily imagination, built on truth. But the truth one uses in fiction must be interesting! Milton expresses that in the words "sensuous" and "passionate," which he applies to poetry in the Areopagitica. And the same thing applies to autobiography, where selection is even more necessary than in fiction. Nothing ought to be told, I think, that does not interest or kindle one's own mind in looking back; it is the only condition on which one can hope to interest or kindle other minds. And this means that one ought to handle things broadly, taking only the salient points in the landscape of the past, and of course with as much detachment as possible....