A Soldier Of The Empire 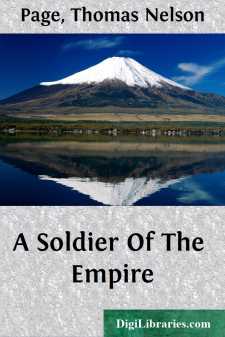 It was his greatest pride in life that he had been a soldier—a soldier of the empire. (He was known simply as "The Soldier," and it is probable that there was not a man or woman, and certain that there was not a child in the Quarter who did not know him: the tall, erect old Sergeant with his white, carefully waxed moustache, and his face seamed with two sabre cuts. One of these cuts, all knew, had been received the summer day when he had stood, a mere boy, in the hollow square at Waterloo, striving to stay the fierce flood of the "men on the white horses"; the other, tradition said, was of even more ancient date.)

Yes, they all knew him, and knew how when he was not over thirteen, just the age of little Raoul the humpback, who was not as tall as Pauline, he had received the cross which he always wore over his heart sewed in the breast of his coat, from the hand of the emperor himself, for standing on the hill at Wagram when his regiment broke, and beating the long-roll, whilst he held the tattered colors resting in his arm, until the men rallied and swept back the left wing of the enemy. This the children knew, as their fathers and mothers and grandfathers and grandmothers before them had known it, and rarely an evening passed that some of the gamins were not to be found in the old man's kitchen, which was also his parlor, or else on his little porch, listening with ever-new delight to the story of his battles and of the emperor. They all knew as well as he the thrilling part where the emperor dashed by (the old Sergeant always rose reverently at the name, and the little audience also stood,—one or two nervous younger ones sometimes bobbing up a little ahead of time, but sitting down again in confusion under the contemptuous scowls and pluckings of the rest),—where the emperor dashed by, and reined up to ask an officer what regiment that was that had broken, and who was that drummer that had been promoted to ensign;—they all knew how, on the grand review afterwards, the Sergeant, beating his drum with one hand (while the other, which had been broken by a bullet, was in a sling), had marched with his company before the emperor, and had been recognized by him. They knew how he had been called up by a staff-officer (whom the children imagined to be a fine gentleman with a rich uniform, and a great shako like Marie's uncle, the drum-major), and how the emperor had taken from his own breast and with his own hand had given him the cross, which he had never from that day removed from his heart, and had said, "I would make you a colonel if I could spare you."

This was the story they liked best, though there were many others which they frequently begged to be told—of march and siege and battle, of victories over or escapes from red-coated Britishers and fierce German lancers, and of how the mere presence of the emperor was worth fifty thousand men, and how the soldiers knew that where he was no enemy could withstand them. It all seemed to them very long ago, and the soldier of the empire was the only man in the Quarter who was felt to be greater than the rich nobles and fine officers who flashed along the great streets, or glittered through the boulevards and parks outside. More than once when Paris was stirred up, and the Quarter seemed on the eve of an outbreak, a mounted orderly had galloped up to his door with a letter, requesting his presence somewhere (it was whispered at the prefect's), and when he returned, if he refused to speak of his visit the Quarter was satisfied; it trusted him and knew that when he advised quiet it was for its good. He loved France first, the Quarter next....