A Padre in France

by George A. Birmingham 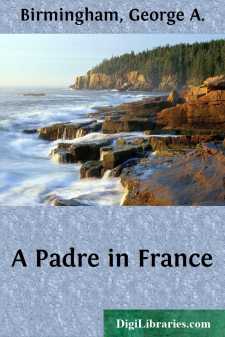 I have always admired the sagacity of Balak, King of Moab, about whom we learn something in the Book of Numbers. He was threatened with invasion by a powerful foe and felt unequal to offering armed resistance. He invoked the aid of spiritual powers by inviting a prophet, Balaam, to come and curse the army of the invaders. Balaam suffered himself to be persuaded and bribed by the king. All kings—and the statesmen who nowadays regulate the conduct of kings—understand the business of managing men so far. Persuasion and bribery are the methods of statecraft. But Balak knew more than the elements of his trade. He understood that spiritual forces, if merely bribed, are ineffective. To make a curse operate there must be a certain amount of conviction in the mind of the curser. Balaam was not convinced, and when he surveyed the hosts of Israel from the top of a hill felt himself compelled by the spirit within him to bless instead of curse. The king, discouraged but not hopeless, took the prophet to the top of another hill, showed him a different view of the camp of Israel and invited him to curse the people from there.

At first sight this seems a foolish thing to have done; but properly considered it appears very crafty. From the fresh viewpoint, Balaam saw not the whole, but only the “uttermost part” of the hosts of Israel. I suppose he no longer saw the first-line troops, the army in battle array. Instead he saw the base camps, the non-combatant followers of the army, a great deal that was confused and sordid, very little that was glorious or fine. It might conceivably have been possible for him to curse the whole army and cast a blight upon its enterprise, when his eyes rested only on the camp-followers, the baggage trains, the mobs of cattle, the maimed and unfit men; when the fine show of the fighters was out of sight. Plainly if a curse of any real value was to be pronounced it must be by a prophet who saw much that was execrable, little that was obviously glorious.

It is Balak’s sagacity in choosing the prophet’s second point of view which I admire. If any cursing of an army is done at all, it will be done by some one, whose post is behind the lines, who has seen, not the whole, but only the uttermost part, and that the least attractive part of the hosts.

It was my luck to remain, all the time I was in France, in safe places. I never had the chance of seeing the gallantry of the men who attack or the courageous tenacity of those who defend. I missed all the excitement. I experienced none of those hours of terror which I have heard described, nor saw how finely man’s will can triumph over terror. I had no chance of knowing that great comradeship which grows up among those who suffer together. War, seen at the front, is hell. I hardly ever met any one who doubted that. But it is a hell inhabited not by devils, but by heroes, and human nature rises to unimaginable heights when it is subjected to the awful strain of fighting. It is no wonder that those who have lived with our fighting army are filled with admiration for the men, are prepared to bless altogether, not war which we all hate, but the men who wage it....